The Kiwi Connection was established last year, a purely kiwi-focused entity that spans the breadth of the industry, from plant material to marketing.

“We believe we’re strong technically and we’re strong in marketing, and that’s what we offer farmers,” says Roelof du Toit, technical manager at The Kiwi Connection, which comprises farmers from Nelspruit in Mpumalanga, where the kiwi season started in mid-February through to the Western Cape where the season ended in the middle of April. 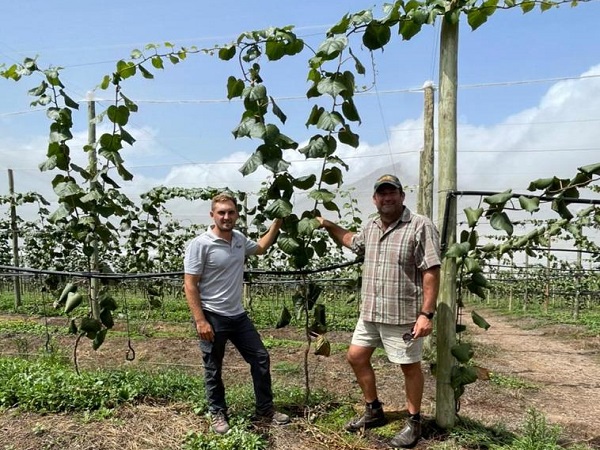 There is a big export opportunity for specifically class 1 kiwi fruit, Roelof emphasizes, and the earlier South African fruit can get into the market, the better.

“We see that as soon as the large New Zealand kiwi volumes arrive, buyers start getting anxious at the large volumes. We have to build continuity with good quality kiwi fruit to develop trust in South African kiwis.”

At the moment Kiwi Connection is half owned by Freshworld with a 50% stake and the other half by TopFruit, in conjunction with whom they’re bringing many new green, yellow and red kiwi varieties into the country and trialling them in a process that is destined to run for the next 10 to 15 years, he says, in order to reduce the risk for kiwi growers. 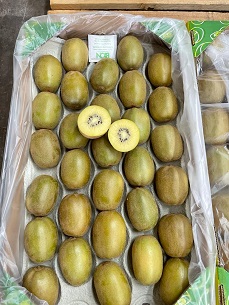 “We quickly realised that kiwis aren’t like other commodities, they are very specialised in terms of production and marketing. It’s definitely a niche product on which you focus 100%, and for that reason it won’t become a commodity that forms part of a larger basket,” he explains.

Right: The Dori golden kiwi, one of the varieties managed by The Kiwi Connection

The vision for the company is that growers become an equal shareholder in the company, as they plant hectares of certain varieties, but the emphasis remains always on producing class 1 fruit – rigorous thinning out, farming for the right sizes – not in covering hectares. The domestic kiwi market isn’t large enough to provide an outlet for class 2 fruit.

“We aim to be a one stop service for the grower and want to maximize grower returns as high as possible by building a company that delivers high value technical expertise and fruit quality to the market.”

He continues: “This year we exported just over 300 tonnes, around 50% of the industry’s golden kiwifruit export volumes, which isn’t very much, but next year there will be a big jump in volumes and growth will continue for the next five years.“

The fruit were sent to the EU, to markets in the Far East like Hong Kong, Singapore, Malaysia, to Dubai as well as to retail programmes in the UK.

As a result of logistical problems it was sent 50:50 air freight and sea freight this year, but in future The Kiwi Connection hopes to move predominantly to sea freight, perhaps opening the season with airfreight.