Fred Eickhorst, Managing Director of the Association of Asparagus and Berry Growers, on the asparagus season:

"The consumer slump, caused by the war, represents an extreme situation against which we are virtually helpless"

The morale of German asparagus growers is currently very low. Due to the war, there are no signs of improvement in the marketing situation either, as Fred Eickhorst, managing director and spokesman for the board of the Vereinigung der Spargel- und Beerenanbauer e.V. (Association of Asparagus and Berry Growers), says. "Local asparagus production is not at 100% capacity because the existing volumes can hardly be sold. So there is clearly more supply than there is demand." 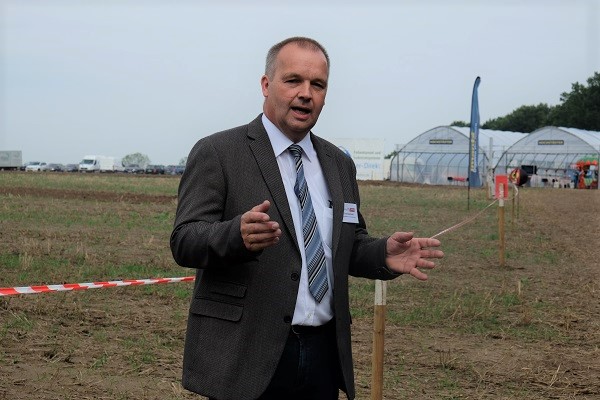 Low price levels
He also said prices have dropped from 20.00 euros/kg to 10.00 euros/kg within three weeks. "Now and then there are positive reports as well, for example from the gastronomy sector. However, it should be said that the current season should not be compared with the situation in the last two years, when the catering industry was mostly shut down. Many establishments report that they have not been able to reach pre-Corona levels. So far, the great asparagus consumption spurt remains absent."

Focus on imports for green asparagus
In the case of green asparagus, there would again be the added circumstance that food retailers primarily market cheaper goods from abroad. "This week, retail has again focused on goods from abroad, although one must also admit that, for example, the Italian goods are of satisfactory quality. We simply don't stand a chance in that market, due to our production costs," says Eickhorst. Spain in particular is a serious competitor in the green asparagus sector.

Declining demand for Dutch produce
According to Eickhorst, demand for asparagus from the Netherlands has decreased significantly, as commodity prices from Spain and other countries also undercut those of Dutch produce. "Dutch produce has often competed with German produce, especially in the premium segment. As soon as the quality of German goods was not perfect, Dutch goods entered the market. But that is not happening this year. The mood among the Dutch is bad as well, similar to our asparagus farmers."

Focus on staples
Even though white asparagus remains in the top tier, the Association of Asparagus and Berry Growers is seeing a growth regarding green asparagus in particular - coupled with an increasing negative trend: "After this year, many farms, especially small ones, will probably stop production altogether, while the large farms will reduce their acreage. The slump in consumption, which has just been added to by the war in Ukraine, represents an extreme situation against which we are virtually helpless," Eickhorst notes. The situation regarding strawberries is comparable. In general, consumers in this country seem to be concentrating on staple foods, while a lot of goods are left untouched in the premium and fruit and vegetable segments.

Problems with early asparagus
However, Eickhorst also admits to mistakes on the part of the association: "We probably started the season with prices that were too high. Although production has increased by 1 euro per kilo due to the wage increase of over 25%, asparagus is currently cheaper than in previous years. Consumers, however, might only have come to the conclusion that asparagus have become more expensive."

According to Eickhorst, the association may also have miscalculated when it came to the issue of early harvesting: "Among other things, climate change has forced us to offer certain varieties earlier. We have also improved the cultivation system and had to adapt it accordingly. As a result, we can market the asparagus up to three weeks earlier, which is why we were also able to largely displace the supply from Greece." However, he said, they failed to communicate to consumers that asparagus would now be coming to market earlier, which is why the low prices can no longer really be adjusted."

"The month of May will make everything new"
Eickhorst also sees little positive impetus from the food retail sector right now to change this circumstance. "What I've been saying lately, though, is that May makes everything new. The weather has been wonderful lately, which has been beneficial for both asparagus foil crops and strawberries. At the beginning of May, the willingness to buy has become a little better. Asparagus and strawberries are definitely still being eaten, just at a much lower level. In addition, drought also remains an area-wide problem."

After an industry meeting between the retail sector and the asparagus and berry association, it is planned to expand the labeling of German goods. Eickhorst is convinced, for example, of the label "Harvested in Germany," on which the outline of Germany can be seen along with the flag. "Whether retailers will actually go along with this is questionable, since the price depends on the interchangeability of the produce, among other things."

Consumer decisions
These challenges will primarily affect small farms in southern Germany, Eickhorst presumes. "The south used to always benefit from the fact that they could achieve good sales with good volumes in the early season. It's similar with strawberries: southern German farms used to be able to score well, especially with the early season, before our produce came from the north. But that planning didn't work this year because we started the season with poor prices. Even the prices for the greenhouse strawberries from Holland were not palatable this year. Ultimately, however, the decision is also up to the consumers as to which goods are sold and which are not," Eickhorst concludes.