"With outside temperatures rising, the restaurant business is noticeably picking up"

Cress traditionally enjoys a rapid increase in demand around the Easter holidays. But this year, Easter business was a little bit below average, reported Christian Gimperlein, co-managing director of the specialized grower Bio-Maintalkresse in Albertshofen. "Easter sales were not as good as in other years, but we were able to sell significantly more in the week following it. In terms of demand, the week after Easter was even better than the Easter business itself." 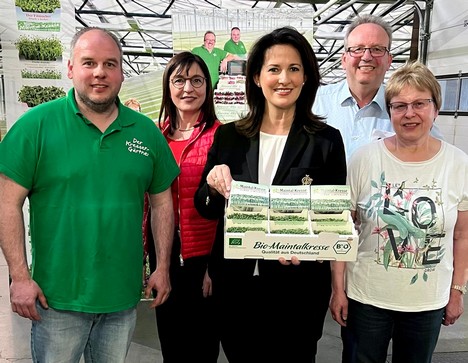 Bavarian Agriculture Minister Michaela Kaniber (m) visited the company a few days ago to discuss the current challenges with Christian Gimperlein (l) and his team.

Difficult market conditions
The Naturland-certified cress producer also faces many challenges and cost increases on the part of production, he said. "Seeds are ordered a year in advance, so we are well supplied here. But the situation is much trickier when it comes to packaging material. We still have enough material in stock because we pre-ordered in time, but if it continues like this, it will become scarce in the long run." At the moment, says Gimperlein, delivery times of five months have to be expected in some cases.

Due to the more difficult general conditions, a price increase in the near future would be desirable from the producer's point of view. However, this is where ideas and reality diverge. Gimperlein: "The prices have to be affordable somehow, not least because the consumer has less money after two years of Corona. In that respect, the cost increases are only somewhat enforceable." 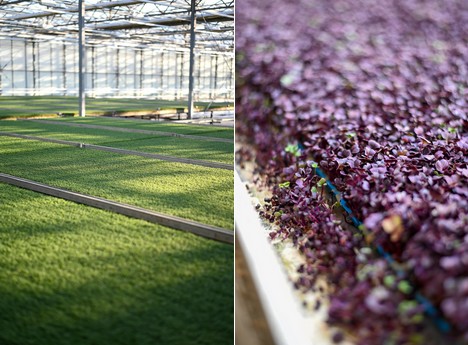 Despite everything, the cress specialist draws a rather positive balance at the end of the classic peak season from Christmas to Easter. "Gastronomers are open again, and business is noticeably picking up with the rising temperatures. Demand from food retailers has also been high and stable in the first quarter. The demand for standard garden cress is rather constant, while exotics are increasingly in demand," Gimperlein continues. 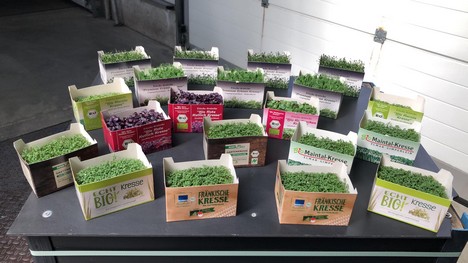 Busy winter and summer
In addition to direct deliveries to (southern) German food retailers, the Bio-Maintalkresse brand is firmly represented at wholesale markets in Munich, Nuremberg, and Frankfurt. "In Munich, we feel an increased demand, especially in winter, partly due to ski tourism. In Frankfurt, demand tends to be concentrated in the spring and summer, which in turn is due to the popularity of the green sauce," Gimperlein concludes.