Amaro Amara, a digestive bitter made with PGI Red Orange of Sicily has received a prestigious recognition from the World Liqueur Awards, ranking first in the world. “We are proud of the award we received during the World Liqueur Awards competition by the Sicilian company, which was created by our associate Edoardo Strano. It confirms the Consortium's policy of granting the use of the name and the product only to companies of proven quality," said Gerardo Diana, president of the Consorzio Arancia Rossa Sicilia Igp.

"We were already working on new agreements with Sicilian and multinational companies, and after this event, we received other requests to use the denomination, which will be examined with the same attention we have always had for our fruit and with the utmost respect for consumers.” 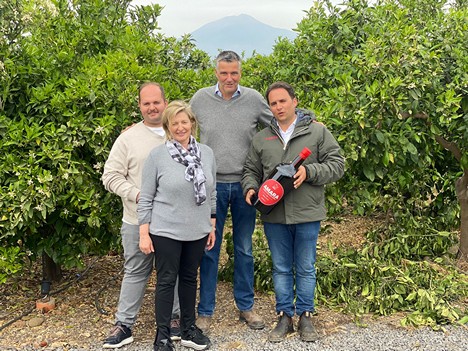 Above in photo, from left: Fabrizio Strano of Amara, Gerardo Diana president of the Consorzio Arancia Rossa di Sicilia Igp, Edorado Strano of Amara. The woman in the foreground is Maria Strano (mother of the two entrepreneurs and brothers).

"As soon as I received the announcement, I personally congratulated Edoardo Strano. This recognition, which is first and foremost a fair reward for the hard work of a young entrepreneur, his close collaborators and his family, also feels somewhat ours. The Sicilian blood oranges are grown at the base of Mount Etna.”

"Thanks to the foresight and perseverance of those who have led the consortium in recent years, the number of brands using our denomination has increased in quantity and quality."

"We include Sicilian companies, multi-awarded for their drinks with the PGI Red Orange of Sicily, but also large multinationals, cosmetics companies, local and international confectionery companies, which allows us to be on the market all year round, not only in the fresh produce sector."

Over the years, no other Sicilian digestive bitter has ever reached such a high rank; for this reason, there is great contentment for Edoardo Strano, who nine years ago pursued his dream of creating an artisanal liqueur made only with peels of PGI Sicilian Red Orange and wild herbs from Etna.

"This recognition has arrived after two difficult years during which we have never compromised on quality. Our efforts have now been recognized, proving that with hard work and commitment you can succeed at anything. We are very proud to receive such an important award, which helps us to achieve our highest priority, namely, to convey the beauty and authenticity of Etna's agricultural territory to the world.”