After an absence of about four years, Anuga Foodtec invited visitors back to Cologne from April 26-29. For four consecutive days, the exhibition center was dominated by automation and technology in the food industry. Despite the lower number of visitors compared to other years, on both the visitor and exhibitor side the trade fair was a predominantly positive affair. FreshPlaza.de also went to Cologne. Watch all attending German and international exhibitors in a comprehensive photo reportage.

Innovations in sorting, packaging, processing and plant technology are traditionally the overarching theme at the internationally recognized Anuga Foodtec. Over 1000 exhibitors from nearly 50 countries presented their innovations on a total of 115,000m2. On the first two days, according to some exhibitors, the event got off to a somewhat slow start, due in part to the King's Day celebrations in the Netherlands. On the third day of the show, or Thursday, it was very crowded in certain halls, as it had been in pre-Corona times. Visitor numbers from the DACH and Benelux countries in particular, as well as France and Italy, were very encouraging. 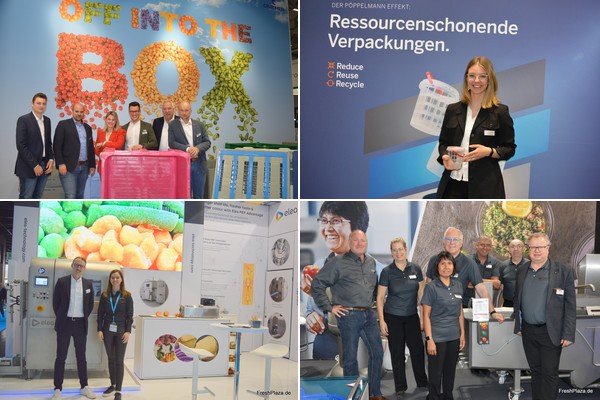 Compared to other years and exhibitors from other sectors of the food industry (such as dairy, bread/baked goods, and meat), the presence of the fruit and vegetable sector was rather modest, again due to the trade show date - some two weeks after Fruit Logistica in Berlin. Nevertheless, the balance on the part of the industry-relevant exhibitors on site was predominantly positive. Although the number of visitors could have been higher, certainly on the first two days of the fair, the quality of the discussions was extremely satisfactory. The predominantly European visitors mostly approached the stands with specific questions and concrete interest, which is why the presence was worthwhile for most exhibitors, according to forecasts.

Freight situation causes problems for industry suppliers
Many machinery suppliers are currently looking with concern at the war situation in Ukraine and the resulting impact on the Eastern European sales market. In addition, raw materials, such as packaging materials, but also spare parts for plant construction are difficult to obtain. In particular, goods delivered by sea are taking much longer to arrive due to longer delivery times and the precarious situation in several major seaports (such as Shanghai). As a result, they are trying to use alternative delivery routes whenever possible.

Willingness to innovate and invest
Furthermore, the longer-term Corona impact on liquidity and the associated willingness to innovate and invest within the food industry appear to be limited for the time being. In the fruit and vegetable sector, too, there is a high demand for new machine solutions and, in general, for automation of operating processes on the part of production. Suppliers are responding accordingly to this trend, which is why numerous sustainable and forward-looking alternatives to existing processes are being introduced to the market.