During the last decades, these are the diseases most seriously affecting the worldwide trade and import of products and materials from these crops. For their effective, and sustainable management, important knowledge gaps were filled working in Africa, America, the Caribbean, and Europe.

Monitoring and developing specific diagnostic methods allowed the identification of the different bacteria associated with these diseases in the ecosystems studied. New insect vectors and alternative host plant species of the studied pathogens were also identified. The knowledge acquired will allow more specific, and environmentally friendly disease management reducing insecticide treatments. Preliminary studies carried out on the bacterial microbiome of the healthy and infected plants also open the way to innovative methodologies.

The results obtained were presented at the final conference in Corsica. The recordings are available on the project website. 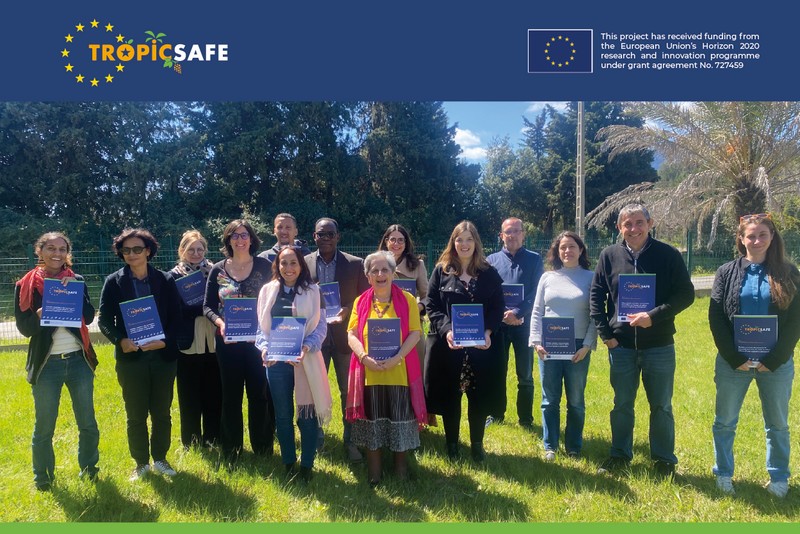 Lethal yellowing
The project surveys in Africa resulted in the identification of ‘Ca. P. palmicola’ strains in coconut palms in Ghana and Mozambique. In Ghana, alternative plant host species and putative insect vectors were identified and a new LAMP diagnostic assay for specifically detecting the phytoplasma was applied. Evaluation of four dwarf coconut varieties showed potential to be used in rehabilitating the coconut industry.

In Cuba, Jamaica, and Mexico ‘Ca. P. palmae’ was detected in coconut and other palm species, and Haplaxius crudus was confirmed as insect vector in Mexico and Cuba. In Jamaica, Stachytarpheta jamaicensis and Cleome rutidosperma were harbouring the phytoplasma, while H. crudus and Oecleus mackaspringii are possible insect vectors.

In Mexico, alternative host plant species were identified, some of which harbour H. crudus nymphs. Different palm ecotypes are under field evaluation for resistance using specifically developed molecular markers. Resistant germplasm from Mexico has been transferred as in vitro plants to Cuba and Jamaica to compare its performance in diverse geographic areas. A qPCR multiplex methodology, based on the secA gene, to distinguish between 16SrIV-A and 16SrIV-D phytoplasmas, was developed in Mexico.

Grapevine yellows
In South Africa, ‘Ca. P. asteris’ was detected in Mesembryanthemum crystallinum, Protea cynaroides, and Raphanus sativus, and in the insects Aconurella prolixa and Exitianus sp. The most abundant insect species in vineyards was Mgenia fuscovaria. A seasonal management plan has been developed including recommendations for leafhopper monitoring, weed control, sanitation, and chemical control. Plant-derived antimicrobial peptides were prepared and preliminary screenings against phytoplasma-containing colonies were performed. The LAMP and qPCR assays developed for detection of the ‘Ca. P. asteris’ South African strain were tested on synthetic target DNA, DNA samples from different phytoplasmas, and grapevine.

In Chile, eight alternative host plants for the ‘Ca. P. pruni’ strain were detected (16SrIII-J), and six insect vectors or potential vectors were identified. In Italy, the main phytoplasma diseases target for management and detection were “bois noir” and “flavescence dorée” but a number of other phytoplasmas were also detected in grapevine and insect putative vectors. An experimental vineyard obtained with the F1 crossing population between genotypes with differential susceptibility to grapevine yellows was infected using insect vectors. Genotyping was carried out on 300 biotypes, while phenotyping is ongoing in the field; merging these data will help the identification of genetic traits putatively associated with grapevine yellows resistance.

A new ELISA kit was developed targeting “flavescence dorée” phytoplasmas and its analytical performances were compared in ELISA versus qPCR in grapevine, other plant species and insect samples. Antisera is produced using phytoplasma colonies of ‘Ca. P. asteris’ were tested by the immunoflourescence assay and were able to detect the agent in colonies containing the phytoplasma and in periwinkle phytoplasma infected samples.

Citrus “huanglongbing” disease
Surveys in citrus orchards confirmed the presence of ‘Ca. L. africanus’ in South Africa and ‘Ca. L. asiaticus’ in Guadeloupe, Jamaica, Mexico, and Cuba, but none of these bacteria was detected in surveys in five citrus-growing regions of Chile and in Spain. Surveys did not result in the detection of alternative insect or plant host species.

The presence of the insect vectors Diaphorina citri in Cuba, Mexico, and Guadeloupe, and Trioza erytreae in South Africa and Spain was confirmed. Since native parasitoids of T. erytreae were not identified in Spain, Tamarixia dryi from South Africa was introduced and showed good dispersion and parasitism efficacy in the Canary Islands and the Iberian Peninsula. The seasonal trend of T. erytreae determined in the Canary Islands indicated between four and five generations per year, but its population remained very low after the summer.

A survey in the main citrus-producing areas of Cuba confirmed D. citri presence throughout the island and its population seasonal trend was connected to management strategies, and irrigation or rains. Elimination of the symptomatic trees at a regional scale resulted in the best management strategy. The efficacy of kaolin against D. citri kept the infestation level very low for two years.

In Guadeloupe, despite the relatively low abundance of D. citri in some orchards under an IPM program, the disease levels and mortality of the citrus trees were very high. Different combinations of rootstocks/varieties were selected and, after four years from plantation, all the trees became infected although they were asymptomatic and had fruits. The qPCR analysis revealed the presence of a low concentration of ‘Ca. L. asiaticus’; the relationship between “huanglongbing” susceptibility and anatomical, physiological, and metabolomic traits with a special focus on the potential impact of polyploidy on tolerance to the disease, was determined. A PCR assay to detect ‘Ca. L. africanus’ and its local subspecies was developed in South Africa.

Click here for more information on the Tropicsafe project

This project has received funding from the European Union's Horizon 2020 research and innovation programme under grant agreement No. 727459