Total organic fresh produce sales for the first quarter of 2022 increased by 4 percent from the same period last year, topping $2.3 billion for the quarter, according to the Q1 2022 Organic Produce Performance Report released exclusively by Organic Produce Network and Category Partners.

While organic fresh produce sales continued to grow in Q1, overall volume declined due to elevated pricing. Conventional produce showed the same pattern, with sales up 7 percent for the quarter (totaling $16.8 billion) and volume declining by 2.7 percent. 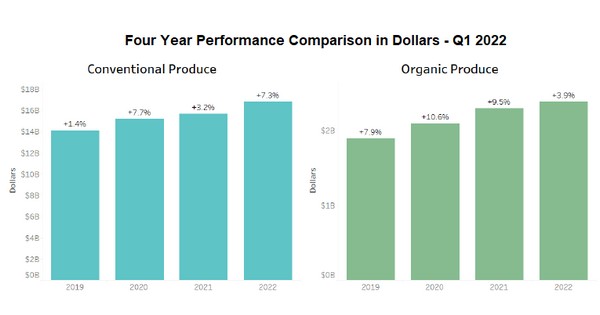 Higher average retail pricing in Q1 is responsible for most of the sales gains of produce items, with conventional produce average pricing up more than 10 percent compared to Q1 of last year. By contrast, organic fresh produce pricing rose just below 5 percent, suggesting it has been able to absorb more of the increased costs related to the current inflationary environment.

“There are some strong takeaways from the Q1 data, most notably that overall volumes remain elevated from Q1 2019, before the COVID pandemic drove double-digit sales and volume gains at retail,” said Tom Barnes, CEO of Category Partners. “We believe the second quarter of this year will tell a similar story as we move further away from 2020 when the pandemic shuttered most foodservice, causing supermarket sales to soar.”

Packaged salads continued dominating in total organic dollars, reaching nearly $400 million for the quarter, a gain of 1.5 percent year-over-year. The berry category (which includes strawberries, raspberries, blueberries and blackberries) grew 9.3 percent in sales from Q1 2021, with strawberries posting gains in both dollars and volume of more than 16 percent. Blueberries were down 7 percent in dollars and 19 percent in volume from the previous year. 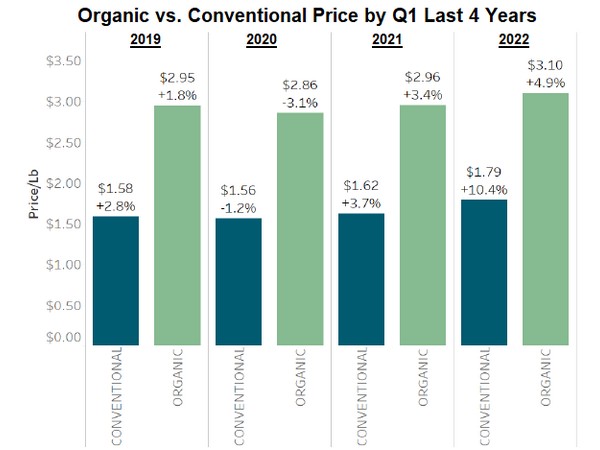 “While organic fresh produce volume declined for the first time in a long while, organic dollar sales continue to grow even after consecutive years of growth due to higher prices across the entire produce department,” said Matt Seeley, CEO of Organic Produce Network. “There remains room for growth of organic fresh produce as long as suppliers remain aware of not only the rising costs of organic produce but also the opportunity presented by a significantly larger increase in conventional produce prices.”

The southern region of the U.S. continued to show the most year-over-year improvement, with dollar growth rising 8 percent, and volume up 3.6 percent. The Northeast was the weakest region, with dollars declining 1.1 percent and volume down 7.7 percent. 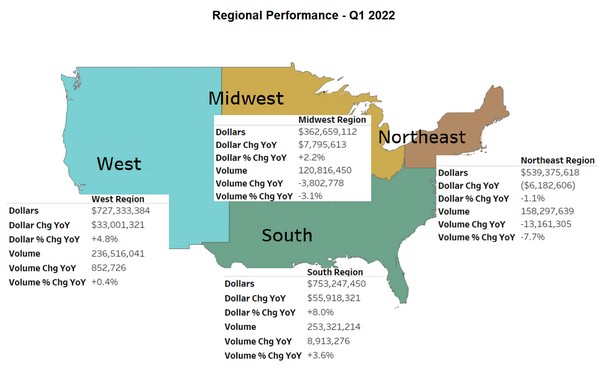 The Q1 2022 Organic Produce Performance Report utilized Nielsen retail scan data covering total food sales and outlets in the U.S. over the months of January, February, and March of this year.