"Sprinkling in cherries is too risky for us, but we do believe in this mobile wind displacement machine"

"The weather is lovely, the bees are buzzing around like crazy", says Erik Vernooij with satisfaction. Earlier this month, however, the cherry grower was less reassured. A frost of -6ºC was expected at night. In the end, the mercury above the cherry orchard remained at -2ºC and the effects of the night frost were limited. Nevertheless, the night frost has kept the grower from Cothen busy in recent years. "When I got into a relationship with my girlfriend two years ago, I mentioned to her that it wasn't that bad, but that is no longer the case. Last year we were up 14 nights fighting the night frost, the year before that 12 times." 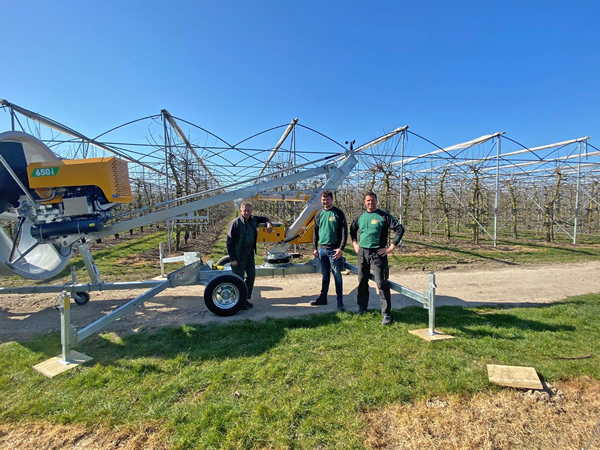 "We have always taken our precautions, for example we have been using fans on the ground. Sprinkling cherries is too risky for us, because of the risk of Pseudomonas. It went very wrong one year, so we learned our lesson from that," says the cherry grower, who grows cherries on 17.5 hectares together with his parents. "We grow up to 55 varieties in our orchard." 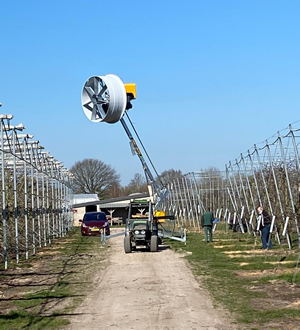 This year, the grower invested in the Frostfans mobile night frost machine. "This machine pulls down warm air from the inversion layer and mixes it with the cold air at the ground. I firmly believe in the way it works. The machine should cover an area of 7 hectares, this is of course with an ideal plot where the rows are planned in circles, but even if its 5 hectares we can save a lot of fruit. With several machines on a large plot, we believe that this large range is achievable. It is still quite an investment, but one that can pay for itself twice over in a short period of time. Once the investment is made, there are practically no costs for running the machine and if in doubt, we just switch it on."

"We have used the machine twice now, so it is too early to draw any conclusions, but I believe in the principle of the machine. This machine is characterised by its ease of use and efficiency," says Erik. He looks forward to the coming cherry season with confidence. "Two weeks ago we had snow on the blossom, but now the weather is nice, the flowers are open and the prospects look good."