These new terminal UTRs—adding to two existing electric vehicles currently in operation at the facility—are funded in part via the Clean Off-Road Equipment Voucher Incentive Project (CORE) administered by the California Air Resources Board (CARB). 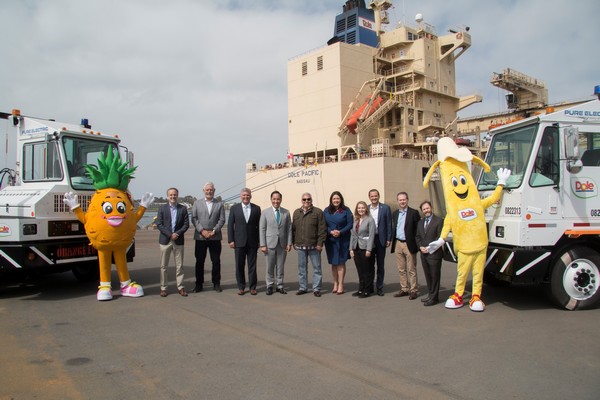 As per the research submitted in Dole’s application to CORE, each new UTR will avoid 0.3194 tons NOx/year over the 10-year life for a total reduction of 3.194 tons NOx per UTR and a cumulative project emissions reduction of 12.776 tons NOx over the 10 years.

With these changes, Dole now affirms 35 percent of its port transfer UTRs are electric, well on its way to meet the company goal to be 100 percent electrified in its UTR fleet by 2030.

“Dole is strongly committed to being a change agent in combating climate disruption and adding electric vehicles to our operations is one area we can make positive emissions impacts,” said Nelson Montoya, president, Dole Fresh Fruit North America.

“In developing the MCAS, we recognized that regional collaboration would be critical in making major air quality and public health improvements on our waterfront and in our neighboring communities,” said chairman Dan Malcolm, Port of San Diego Board of Port Commissioners.

“I am proud the California Air Resources Board provided this important funding and I applaud Dole for its early action in replacing diesel-powered utility tractor rigs with zero-emission electric models,” said Nora Vargas, vice-chair, San Diego County. “This is the kind of smart investment by the state that helps fight climate change and cleans up the air that families breathe in this Portside community.”

In alignment with The Dole Way sustainability framework, Dole has demonstrated its continuing commitment to the local environment and surrounding communities of the port by the following:

Dole strives to exceed compliance plug in requirements. The company will announce a partnership with San Diego Gas & Electric to build a new fleet charging station at Dole’s facility at the Port’s Tenth Avenue Marine Terminal as it moves further to electrify all 20 UTRs in its fleet.