Despite the installations to fight the frost, many producers were not able to protect their crops. It is still too early to fully assess the damage, but some professionals can already see some considerable damage on their farms. “The most affected crops are the fruit orchards: stone fruit and pome fruit, like plums, cherries, apples and pears. In the Rhone Valley, the apricot and peaches seem to be less affected than last year, but some other stone and pome fruit crops have been completely destroyed,” explains Christiane Lambert, president of FNSEA. 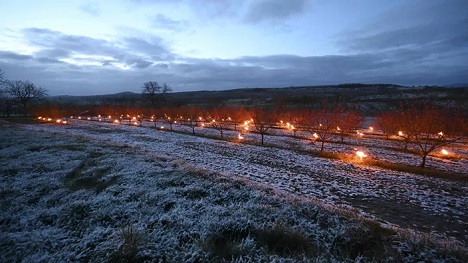 Bruno Darnaud, president of the PDO Peaches and Apricots of France and president of GEFeL (Economic Governance of Fruit and Vegetables) is rather “optimistic” about the peaches and apricots, compared to the damage observed in 2021.

In the Lot-et-Garonne department, the French Interprofessional Prune Bureau estimates that “nearly 70% of the prune harvest is already compromised.” “It is another hard blow for the Agen prune sector, which has been devastated by the frost since April 2nd. The entire PGI area is affected and the damage seems comparable or even more significant than last year.” Only the plums cultivated at higher altitude were able to escape the frost.

In the Tarn-et-Garonne department, the three nights with temperatures below 0°C have impacted the stone fruit orchards considerably, with nearly 80% of losses due to the frost,” explains Alain Iches, president of the Chamber of Agriculture of Tarn-et-Garonne.

The kiwis from Lot-et-Garonne are also affected. On some farms, 100% of the buds were burned on the night of April 2nd and 3rd. Contrary to last year, the open field strawberries were also affected, with maybe 30% of frozen flowers.

In Alsace, the orchards have also suffered, with temperatures as low as -8°C recorded on many farms of the Haut-Rhin and Bas-Rhin departments. Despite the efforts made to warm up their plots, the producers of fruit like cherries, pears, peaches and apricots are expecting to lose up to half of their harvest.

The Nouvelle-Aquitaine region was not spared either. There, the plum and kiwi producers seem to be the most affected, according to the first observations.

Activation of the National Fund for Agricultural Disasters
Jean Castex went to Cazes-Mondenard (Tarn-et-Garonne) to see the impact of the frost on the orchards. The French prime minister declared that an emergency aid plan of 20 million euros [21.8 million USD] would be activated, in addition to the “national fund for agricultural disasters” announced on Sunday. He also recalled the importance of adapting French agriculture in order to cope with the increasing number of exceptional climate phenomena. Another measure will also be taken regarding the “exceptional assumption of social security contributions” for the affected farmers. 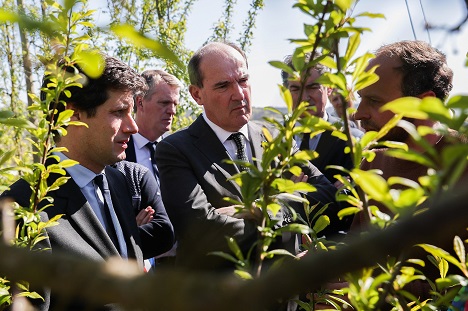