The first New Zealand onions arrived at Van der Lans International last week. The quality is superb and the first containers have already been placed. For many years we have been importing New Zealand onions from our partner Balle Bros in Pukekohe, a large family business with several farms on both the North and Southern Island. Their main crops are onions, potatoes and carrots. However, it is expected that significantly less New Zealand onions will be shipped to Europe this season."

Information indicates that there are already 50% less NZ onions coming into Europe " says Derk van Stokkum. "Due to weather conditions, New Zealand has a smaller crop at its disposal, especially in the bigger sizes (65+). In addition, there are high yields of high-quality onions in the Netherlands and Europe. Large retail customers therefore continue for a long time with European onions and will switch to import onions at the earliest at the end of May," Derk expects. 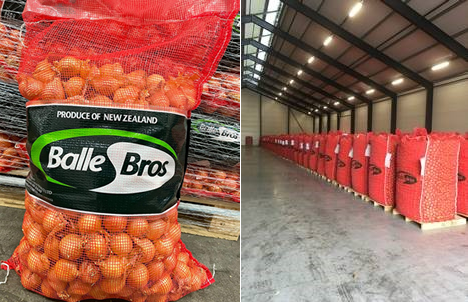 "In addition, the high sea freight costs make the exports of New Zealand less attractive. That issue only costs +/- ten to twenty cents per kilo onions. That is not easy in a market where there is hardly any demand. That is why many New Zealand exporters are looking for sales in Asia and especially Indonesia, where they charge less freight rates and also get better prices for the middle grade onions. The customers we currently supply with New Zealand onions are real specialists, especially in the German wholesale markets, which we mainly supply in 25 kg packaging," says the importer.

In addition to the New Zealand onions, Van der Lans currently sells white onions from Australia and Mexico. "We mainly sell these to catering and food service-related customers. The demand is good. Normally, India is also on the market with white onions at this time of the year, but they are now only expected in the second half of April. Because many arrivals are delayed, demand remains at a good level," says Derk. The white onions are now mostly sold to German packers, who sell them with a sweet and red onion as a traffic light packing.

"Chilean onions have also been delayed. Normally this season often starts at the beginning of April, but this year it will only start at the end of April. Last but not least, we receive yellow onions from South Africa for the third year in a row. They have nice, big sizes available this year and these are very popular and are sold quickly despite the high prices," concludes Derk.