Murcia exports the latest developments in high-tech greenhouses to UAE

The Region of Murcia exports to the United Arab Emirates the latest developments in high-technology greenhouses, said Antonio Luengo, Minister of Water, Agriculture, Livestock, Fisheries, and the Environment, at the inauguration of a more than 12,000 m² new greenhouse for soil and hydroponic crops in the Emirate of Sharjah by the Rufepa Tecnoagro company.

The councilor was accompanied at the event by Sheikh Dr. Sultan bin Muhammad Al Qasimi, Ruler of Sharjah, member of the Supreme Council of the United Arab Emirates, and the director-general of Rufepa Technoagro, Jose Antonio Morales. 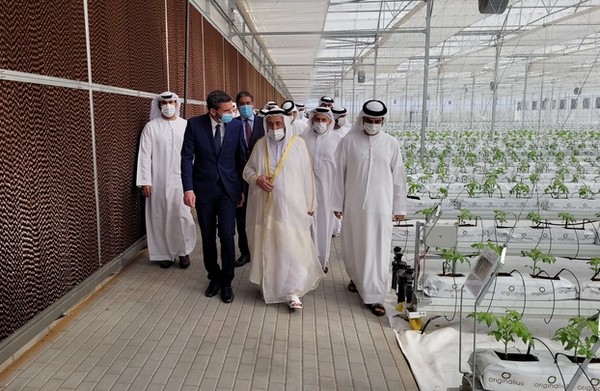 "We are proud to see how the most innovative irrigation water management technology developed in the Region is solving extreme situations of need for agricultural production with water scarcity. It is the best impetus to continue investing and advancing in modernization," Minister Luengo stressed.

The project, built by Rufepa Tecnoagro, has a greenhouse with cellular polycarbonate cover composed of 2 cultivation sectors separated by a corridor covered with mesh (where the air intake for the cooling system is carried out) and with a service area for the auxiliary equipment made in tubular structure and sandwich panel cover. The entire system is controlled by a climate control system with specific software operating on an industrial PC. The temperature and relative humidity sensors in each sector are connected to this PC, as well as the sensors that measure the external solar radiation, the speed and direction of the wind, the temperature, and relative humidity outside.

The project offers the possibility of cultivation in soil with integrated drip irrigation, but also through the hydroponic system for which it has been equipped with a cultivation system in bags of coconut fiber as a substrate, placed on steel cultivation channels suspended from the greenhouse structure, the irrigation water drained is collected in a drainage collection tank for subsequent disinfection with ozone so it can be reused.