A Far North Queensland citrus grower believes he is already prepared for the upcoming piece-rate legislation, encouraging fellow producers to consider investing in specialised technology software solutions to not only streamline operations but improve productivity.

Originally from South Africa, Wim van Niekerk started farming in 2016 and has since developed two citrus farms in Dimbulah. A recent Fair Work Commission decision to install a minimum wage in the Horticulture Award will create challenges for many fruit and vegetable businesses. Mr van Niekerk was presenting at the Citrus Technical Forum on the Sunshine Coast, where close to 350 delegates attended the two-day event, which wrapped up today. He explained that he has utilised New Zealand company ABC Software, which has a tool to help keep a record of the hours worked by pieceworkers, in line with legislation.

"With the new laws that came in on piece rates and minimum wage, we have already been implementing that for the past three years unknowingly," he said. "I didn't know that changes would be made to those laws, but we have been doing it anyway. ABC is a fantastic platform and we have used it for the past few years, and what it does is that we can do any work on the farm from an hourly wage to picking lemons in the afternoon at piece-rate, until for example, it rains and the trees get wet, so they need to go back to an hourly wage - then with a press of a button ABC takes everything back to a piece rate. You can even trace the work back to an individual tree if you really wanted. It can even help with traceability if you are exporting." 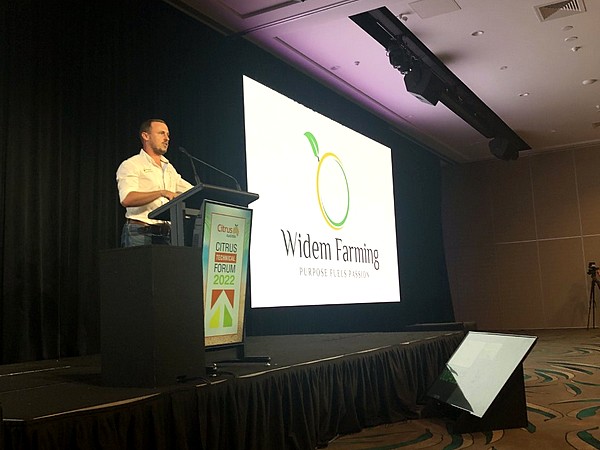 Mr van Niekerk told this week's Citrus Technical Forum that he has tried to bring in systems and ideas from his homeland to help improve efficiencies.

"Having some background information on South Africa and how they do it, I tried to figure out how do we in the citrus industry can become more competitive with the world out there," he said. "Our labour costs there isn't all of what we pay here in Australia, and it is very hard to compete with them. When I started it was frightening, especially coming from South Africa, it's a month's worth of wages for people back home, per hour. It's crazy. So, we tried to figure out how to get them productive, especially with the new law coming, because workers will come to your farm to pick at piece rate - but they don't have to as they know they are going to get an hourly wage. With the platform, all the information is on the cloud and directly available. In the morning we print a report, and it is a bit of seeing is believing; you can show these workers what they have done and what they have earned, and what their colleagues have done, and when they realise that they got so close to earning extra money, the productivity the day after goes through the roof. We have seen costs go down 20 per cent and productivity go up 20 per cent."

Also, on day two of the Forum, there were several sessions covering areas such as Commercial Tech, which included information on products and services such as drones, frost fans, packing line sorters and graders, and data monitoring software. There was also a new tech, biosecurity session, a nursery development and new variety session, and a post-harvest session.

FreshPlaza attended the event and will publish a photo report tomorrow.