"The topic of microplastics is increasingly relevant"

At the turn of the year, the ECHA law came into force, which states that new fertilizers containing microplastics may no longer be introduced to the market. From 2026, all existing fertilizers containing microplastics will also be banned. "This is an important sign that the issue of microplastics is visibly gaining in importance," says Wolfram Müller, Sales Manager of Ad Terram Ltd, which was founded in 2017 and is based in Bad Essen. The subsidiary of the internationally active group of companies of the same name offers several approaches to solutions for a gentle and environmentally friendly vegetable production.

Ad Terram is focusing on innovative coatings, free of intentionally added microplastics. Müller: "As a result, our coatings have a free water content of only about 1%. Conventional processes involve coatings that contain microplastics and are therefore not only harmful to the environment, because microplastics will only be broken down over several decades, but also because they have to be mixed with approx. 50% water. This requires subsequent drying of the coatings, which in turn requires considerable energy and time."

The coatings, on the other hand, contain a free water content of about 1%. "Since water must not be added under any circumstances, they will already dry during the coating process. This makes it possible for seed to be packaged immediately after the coating has been applied, without having to dry it," Müller says, referring to the increase in efficiency. 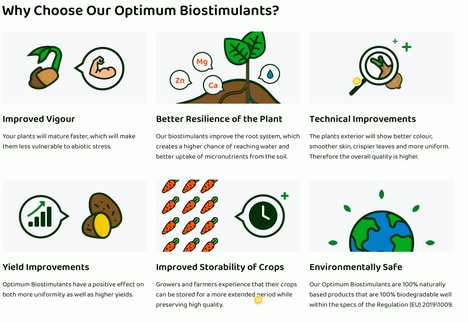 Ecological treatment and added value
According to Müller, when it comes to microplastics, people often only talk about the pollution of the world's oceans. "However, if you take a look at agriculture, it becomes clear that all fertilizers and coatings also "poison" the environment with a great deal of microplastic. The microplastics get directly into the soil. This is now to be prevented by the new legislation. We are responding to the development at an early stage and are proving with our coatings that ecological treatments and an increased yield are not mutually exclusive."

In addition to the coatings, Ad Terram is also launching other solutions, such as Optimum Biostimulanz. It is designed to help the plant fight abiotic stress by expanding the plant's root systems and thus facilitating nutrient uptake. Says Müller, "We have different ways of using our biostimulant: either directly on the seed as a coating, in the soil, or, for example, for potato and vine cultivation."

Optimum has produced increased yields in past trials by Ad Terram, and partner company agri Saaten Ltd use the biostimulant on its own seed, Müller continues. "New to the product range is our AMF (Abruscular Mycorrhiza Fungi), a fungus that forms a symbiotic relationship with the plant. The fungus colonizes the root of the plant, thereby expanding nutrient uptake. In the symbiosis, the fungus receives the photosynthesis product sugar from the plant, and in return, the fungus provides nutrients such as phosphorus and nitrogen to the plant."

AMF protects the plant from Rhizoctonia by means of the mycorrhizal fungus the plant why it is no longer possible for the Rhizoctonia fungus to occupy the plant, he said. "Our AMF is available as a coating and granules and powder. We believe the former has not been available on the market before and thus offers a unique selling point."

Water and organics
Rounding out Ad Terram's forward-looking product range are rhizobia, which are also available as granules. "These nodule bacteria enter into a symbiosis with legumes in that the bacteria attach themselves to the plant and form so-called 'nodules'. They fix nitrogen from the air, which is not possible for legumes per se. By converting the nitrogen bound in the air, the bacteria provide nutrients to the plant. In return, the bacteria receive water and organic matter, for example," Müller concludes.