"This is another challenge that growers will work to overcome in the coming weeks and months."

Australia's peak vegetable body says it is too early to gauge the full impact of major flooding on the supply chain, with many properties inundated and suffering damage following major storms.

Many regions across southeast Queensland and northern New South Wales are experiencing devastating weather and floods, which are impacting production regions and many regional and rural communities. Several vegetable crops were either in the harvest season, or preparing for autumn/winter production when the storms hit over last weekend, particularly in the Lockyer Valley and north as far as Bundaberg, as well as properties in between.

AUSVEG National Manager - Communications, Shaun Lindhe says the affected regions are some of the most productive in the Australian vegetable industry and were experiencing good seasonal conditions prior to this extreme weather event.

"It is particularly devastating for growers impacted by these floods," he said. "Not only this, but the floods are having flow-on effects throughout the broader supply chain, such as road closures and disruptions to a wide range of businesses, including flooding in the Brisbane Produce Market. Growers in the region, and all over Australia, have faced significant hardship and challenges over the last two years due to COVID-19, supply chain disruptions and input cost rises – this is another challenge that growers will work to overcome in the coming weeks and months." 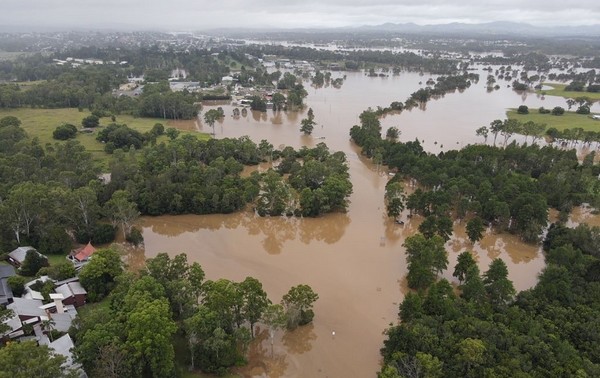 Photo: Some of the impacts of Queensland flooding north of Brisbane, source Qld Fire & Emergency twitter.

While the exact impact on supply is unclear at this stage, AUSVEG calls on consumers to support local growers and the local industry through this difficult time and buy fresh produce to help those businesses that have been significantly impacted by floods. While disaster assistance is available to those affected local government areas.

"To assist with the collection of flood impact data in Queensland, AUSVEG, along with Queensland State Member Growcom and the Queensland Department of Agriculture and Fisheries, are encouraging primary producers to complete the online Natural Disaster Impact Survey and keep records of the impact of the floods on their properties and businesses, including photos," Mr Lindhe said. "This information will ensure DAF is able to capture relevant information required to prepare applications for assistance more quickly to support recovery. It is also important for growers to look after themselves, as well as their friends, families, colleagues and community members during this difficult time, and to seek help if they need it."

It is not just vegetables that were affected, with tropical fruit, mango and pineapple farms affected near the Sunshine Coast, and several berries and other small fruit farms in Northern New South Wales in the Lismore and Ballina region. There was not just damage to crops, but trucks transporting the fresh produce were delayed, as roads and highways were cut.

Meanwhile, traders at the Brisbane Produce Markets were able to access the site today to begin preparations and packing orders, with trading expected to resume tomorrow, after being closed for several days. Many companies are advising customers through social media channels that supplies will be limited, with limited trading room available. As well as some items of produce have had to be thrown out after being flood-affected or left in storage rooms for several days without power. Areas of the markets will still be closed for some time, as reinstatement work is carried out.

More rain is expected for South East Queensland later in the week. While further south, heavy rain is forecasted for the New South Wales east coast, including the Greater Sydney region, and some regions of Victoria, with farmers on alert with forecasts of possible widespread 50-100mm rainfalls, with some isolated totals in excess of 200mm.

For the latest forecasts and warnings, visit: www.bom.gov.au