ABARES: "We would anticipate an increase in the demand for premium products"

An Australian government report from the Department of Agriculture, Water and the Environment has found that there will be increasing opportunities for fruit and vegetable exporters to grow trade with one of the country's closest neighbours, Indonesia in the next few decades.

The ABARES Insights report ‘Indonesia’s food consumption and trade: will domestic reform keep up with demand?’ describes the pressure that Indonesia will face over time to open up its market to more diverse food types, as consumer incomes increase and they demand a wider range of products. In addition, it noted that three-quarters of the value of food consumption growth to 2050 will be supplied by imports, providing greater markets for Australia's export-oriented fruit and vegetable sector.

"Changing consumer preferences have led to strong demand growth for imported fresh fruits such as berries, citrus, table grapes and summer fruit," a departmental spokesperson told FreshPlaza. "While the ABARES long-term projections examine fruit as a whole, it is reasonable to anticipate these commodities will continue to provide opportunities for Australian exporters." 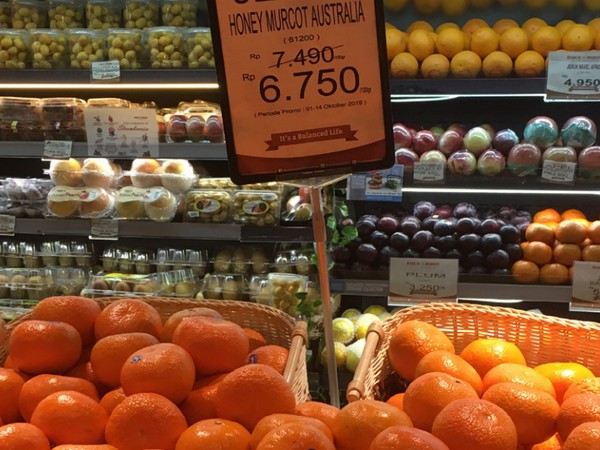 Indonesia produces a diverse range of mainly tropical fruits, but changing consumer preferences have led to strong demand for imported fresh fruits such as apples, berries, citrus, grapes and stone fruit. In 2020, Indonesia imported fresh fruits valued at US$1.2 billion, and Australia was the second-largest supplier of fresh fruits to Indonesia, but made up only 8 per cent of imports, behind China, which had a 66 per cent share.

"These projections are from an ABARES report: 'What Indonesia wants: Analysis of Indonesia's food demand to 2050',” the spokesperson explained. "The forecasts take into account real-world historical consumption levels and projections of the future based on economic and demographic change in Indonesia, such as GDP, urbanisation and incomes. Even though the projections were published in 2015, the conclusion that food demand will be driven by income growth, population growth and urbanisation remains correct. As incomes in a country rise, like in Indonesia, we would anticipate an increase in the demand for premium products."

The Department explained that many Australian producers and exporters are well placed to meet this growing demand, but the report also describes the potentially favourable signs offered by the changing policy environment in the country, such as Indonesia’s pursuit of FTAs and the Omnibus Law. But the report notes that many restrictive regulations persist, including a complex Non-Tariff Measure framework, and self-sufficiency.

"Self-sufficiency remains a principal driver behind trade policy in Indonesia," the spokesperson said. "But this idea may be tested over time, as the economy develops and incomes rise, and consumers increasingly demand high-value and diverse food products. The Australian Government has publicly stated its commitment to reduce burdensome non-tariff barriers internationally and to continue to work in the global multilateral trading system to reduce agricultural subsidies. Industry requests on non-tariff barriers are dealt with collaboratively between industry bodies and the Australian government, and a great starting point for industry is the government’s portal."

According to the Australian government, Indonesia is projected to be one of the fastest-growing countries amongst its trading partners over the coming decades, with GDP growth and income growth projected to exceed even China.

"The country also has the 4th largest population in the world, and is undergoing rapid urbanisation – which fuels changes to incomes and diets," the spokesperson said. "Indonesian diets generally remain focused on staples like rice. But as incomes rise, non-staple foods like fruit and vegetables, dairy and red meat will drive food demand growth. Australia’s proximity to Indonesia means that for any fruit and vegetables with a short shelf life, Australia may have a natural advantage in terms of time to market. However, it is important to know that Australia faces many competitors in Asia, particularly from other nearby horticultural exporters, and these exporters can also benefit from similar geographical advantages.