Agro Belgrade Fair: The future of berry growing in Serbia 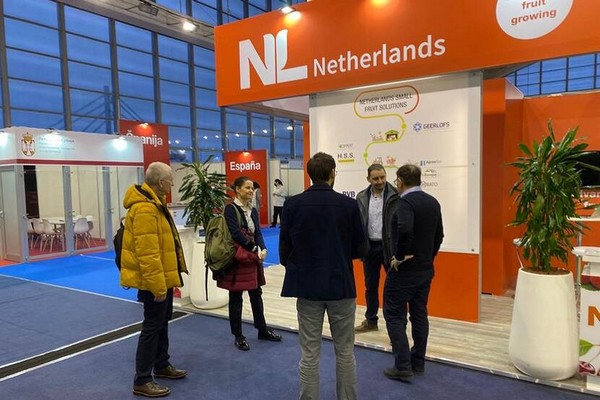 Serbia is one of the few countries in the Western Balkans with a positive trade balance in agriculture. Its fruit sector is characterized by the highest yields in the region. As for berry fruit production, on a global scale, Serbia is among the three top producers, the other two being Poland and Chile.

This very entrepreneurial sector exports produce to Western Europe, but also supplies other regions in the world with an increasing demand, like for example Russia, the Middle East region, and other regions and nations even as far as China and Japan. The COVID-19 pandemic increased the demand for healthy nutrition, which translates into increased demand for berry fruits. As demand increases, economic logic dictates that prices go up, provided the supply holds out.

In order to seize the opportunities on the Serbian soft fruit market, twelve Dutch companies cooperate in a PIB project Netherlands Soft Fruit Solutions Serbia, organized a conference at the fair titled The Future of berry growing. Several speakers from both the Netherlands and Serbia shared their outlook on the soft fruit sector.

Adrie Streef from Delphy acknowledged the quality and taste of the local produce but shared the importance of following market trends and demands as well as the importance of environmentally friendly production. Mr. Streef underlined that production strategies for the frozen and the fresh market differ.

Transferring from soil to substrate production would enable farmers to prolong the harvest and extend the production season.

Professor Momirovic, representative of Koppert Serbia stressed the importance of the new technologies and new berry varieties as tools for the improvement of the production level as well as for reaching higher produce prices.

Mr. Darko Jevremovic, Director of Fruit Institute in Cacak explained the differences in plant protection implemented in covered production as opposed to open field production. Mr. Jevremovic pointed out the benefits of substrate production, mainly pest risks reduction. Mrs. Ivana Bakic from IPN presented activities of their Institute, including the identification of producer’s needs and tailor- made trainings for the Agriculture Advisory (Extension) Service of Serbia.