"The long-awaited price increases for the growers have finally arrived"

The table potato market is currently at an impasse: "Firm-cooking potatoes are expected to be in sufficient supply, with predominantly firm-cooking and floury-cooking tubers being increasingly sought after. Compared to previous years, the gradings are relatively high. Overall, we have been fighting for weeks to increase prices for our stock, which was unfortunately not possible during the Christmas season. Now, the long-awaited price increases for the growers have finally arrived, which were absolutely necessary from our point of view," says Christian Fockenberg, one of the two managing directors of Bottrop-based T. Stadtmann & Co, outlining the current market situation.

Although quality goods are available, they are nevertheless not as plentiful in quantity as usual, which is why the differences between gross and net stocks are considerable. "If table potato cultivation is not to be subject to industrial potato cultivation in the future, the price level must meet the requirements. Due to the high quality requirements in the food sector, every fourth potato currently becomes fodder; but this should also be reflected in the pricing," Fockenberg continues. In the Benelux countries in particular, industrial companies have expanded their capacities, which is why more raw material is needed and attractive prices are being paid. 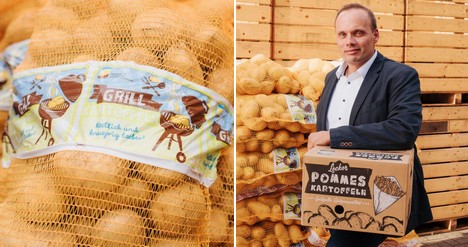 Slow start to the import season
Despite the current circumstances, imports of table potatoes are still limited at present. Fockenberg says, "We received smaller quantities from Cyprus in December for special programs, but due to the precipitation, further shipments are not possible at the moment. Israel is not expected to be present in market-relevant quantities until the end of March at the earliest, Egypt perhaps a few days earlier. Until then, France is the only alternative at the moment, however, according to information, the quality of the goods there are not too great either. The domestic stocks will probably last for a while, after which we will eventually help ourselves to Spain and Portugal with table early potatoes."

Onions and sweet potatoes
Since the post-war period, domestic potatoes in all varieties have been the core competence of Stadtmann, whose company was founded in 1912. For a long time, onions, garlic, and sweet potatoes have also been offered. "The latter come from Portugal, Spain or Egypt, depending on the listings. The lion's share, as well as the most visually appealing goods, are still being sourced from the USA. Marketing-wise, the sweet potato trade is an extremely erratic business. In terms of demand, the big hype seems to be over now, although a basic volume is always needed in the trade," Fockenberg explains.

Due to area expansions and optimal cold storage capacities. the marketing of domestic onions has noticeably gained in importance in recent years, he says. "Right now, the market is limping along a bit. However, on the producer side, onions have been able to establish itself as an interesting crop from an arable point of view. The first New Zealand spring onions will hit the market in mid to late February. The construction of new domestic CA long-term storage facilities is, of course, at the expense of imports. In the state of NRW in particular, many newcomers and lateral entrants have decided to grow onions in the last few years, which is why we have become about a self-sufficient state between August and May."