Spanish cauliflower is gaining more and more ground in central and northern European markets due to its qualities, and has, in fact, already achieved a great position in the United Kingdom. This is causing its production to almost double in the last 5 years in the fields of Murcia, the main producing area in Spain during the winter months. Despite this, the volumes are still far from the ones of other more common brassicas, such as broccoli.

"About six years ago, British supermarket chains had some Spanish cauliflower in winter to fill the gaps left by some production shortages in the west of England," says Nacho Domenech, CEO of Agromark, a company based in Torre de Pacheco, Murcia, which has become the largest Spanish cauliflower producer during the winter. 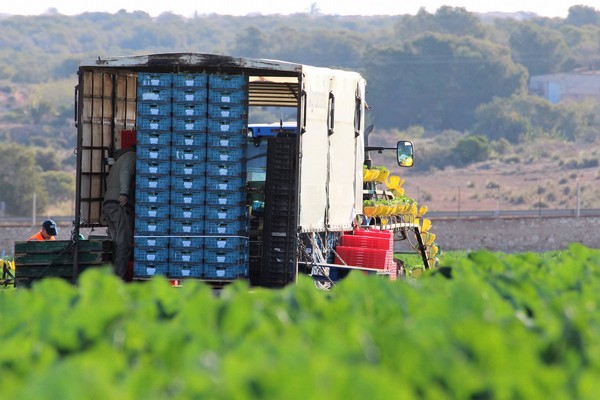 "The caliber 6 cauliflowers (extra large) are currently 100% Spanish during the winter in the UK, while the 8 (medium) accounts for around 40-45% in Sainsbury's and 100% in other chains, such as Mark & Spencer. The regularity, traceability and quality of Spanish cauliflower, in terms of flavor, color and size, is highly appreciated compared to English winter cauliflowers," he says.

Although due to temperature cycles there has been a lack of production until the Christmas period, there has again been some supply in January. 85% of Agromark's work is carried out in closed programs signed with British, Dutch and Swiss supermarket chains. The smaller and individually packed sizes are delivered to Scandinavian chains.

"The truth is that cauliflower is yielding great results for us. It is becoming an increasingly appreciated product with strategic value, unlike broccoli, which is a more difficult product when it comes to obtaining profit margins due to the high pressure on prices," says Nacho.

"The popularity of Spanish cauliflower has led to the acreage in Murcia doubling over the last 5 years. For some years, we have been showing Europe that our product is reliable and that it is available for 8 months in winter, with all guarantees. In fact, it is displacing the Breton and Italian cauliflower in many European markets, as their producers have more difficult climates than ours to deal with. Moreover, we are now also able to produce it in summer, so cauliflower is available for 12 months of the year."

A season with less broccoli speculation
According to the grower and exporter, less broccoli has been planted outside of programs this year, so the free production volumes have dropped a lot, and there has consequently been much less speculation.

"This month we've had a higher production, but it seems that with the drop in temperatures this week the volume will regulate again. It's been a good year in terms of quality, with no botrytis damage, as there has been hardly any rain, which has given us a good respite so far this winter."

The real problem for broccoli this season has been the rising costs of electricity, transport, salaries etc. "We are trying to pass on the rising costs in the final prices, with increases of between 15 and 20%. Some customers are understanding this campaign and others not so much," says Nacho Domenech.

"Kale consumption continues to increase, but in a more stable way".
Kale is another of the vegetables produced and marketed by Agromark. While it had been recording double digit increases each year in previous campaigns, its growth has now stabilized, according to the CEO of this company.

"The consumption of kale continues to increase, although in a more stable way than in previous years. There is a rise in the demand from supermarket chains in Scandinavian countries, Switzerland, and in the Netherlands, which is a large producer, but is now finishing its season and is starting to demand our kale. In Spain, it is also becoming increasingly present, although still in small quantities, in discounters such as Aldi and Lidl, and a little also in Mercadona. Kale is being marketed mainly in bags, in the fresh-cut and ready-to-eat section."