Across the globe, more nuts of almost all kinds are being produced. In 2021, that amounted to more than 17 million tons in total (excluding peanuts). With four million tons each, cashew nuts and almonds are the most important of these nuts. Almond production, in particular, has grown considerably.

Worldwide exports, too, are on the rise. These increased to more than nine million tons, valued at almost €30 billion. Inshell and well as shelled trade climbed. That varies from variety to variety, though. A lot of shelled nuts are exported, then shelled elsewhere and re-exported as such.

The United States is by far the leading exporter. Ivory Coast, Vietnam, Tanzania, Ghana, and Indonesia follow. If you include coconuts, Indonesia is at number two. In recent years, much trade of especially unshelled nuts has been lost. That is mostly from the US to Hong Kong. The Netherlands is an important transit country for various nuts to the European market. 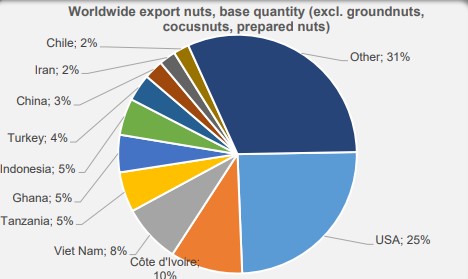 Cashew nuts: a lot exported, in shell, from Africa to Vietnam
Worldwide, 4.2 million tons of cashew nuts were grown in 2021. Of these, 1.9 million tons were exported in shell, and 700,000 tons, shelled. Walnuts are the third most-produced nut, with 3.3 million tons.
Ivory Coast and India are the two largest producing countries. Vietnam, Burundi, the Philippines, and Tanzania follow.

African countries export lots of unshelled cashews. These go especially from Ivory Coast to mainly Vietnam and India. Vietnam then shells and exports many of these to North America, China, and Europe. The US and Germany are the leading shelled cashew nut importers.

Imports from the Netherlands are growing too. In 2021, that country brought in more than 60,000 tons of shelled cashew nuts, mainly from Vietnam. And 15,000 in shell, mainly from the  United States and Chile. As well as re-exports from Germany, Ukraine, and China.

Almonds: growth product, especially from the US
Almond production has risen rapidly to more than four million tons. In shell exports have increased to 350,000 tons; shelled to 850,000 tons. The United States accounted for nearly 60% of world production. Spain, Australia, Iran, Turkey, Morocco, and Syria follow far behind.

The US has a large export share. For in shell, that is more than 80%, and for shelled, it is 75%. India is by far the largest importer of unshelled almonds. Most shelled almonds go to European countries. The Netherlands imports mainly shelled almonds, 80% from the US. 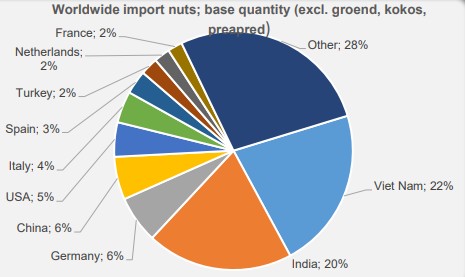 Walnuts: quite stable, much from the US; much to Europe
Walnut production remains reasonably unchanging at around three million tons. This does fluctuate from year to year. China accounts for a third of the world's walnut production. There has been no growth there. Production in the United States and Turkey has, however, risen.

More unshelled than shelled walnuts are exported. The US is the largest exporter of both in-shell and in-shell walnuts. These account for, respectively, 37% and 40% of global exports. China and Chile, too, export lots of in-shell walnuts.

Turkey is the main importer of in-shell walnuts. Most of these come from the three export countries mentioned. Other major importing countries of unshelled walnuts are Mexico, Italy, and the United Arab Emirates.

Germany is the primary importer of shelled walnuts. Japan, Spain, Canada, and Korea follow at a distance. The United States supplies most of the Netherlands' walnuts. Spain and Australia follow. 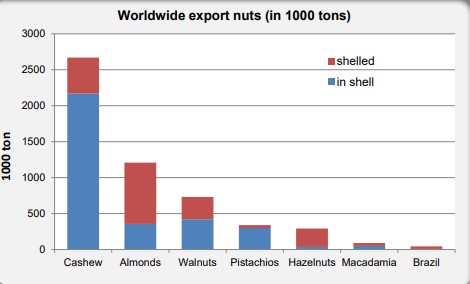 Pistachios: Much from mainly the US, Iran; much to China
Global pistachio production has been between 900,000 and 1.1 million tons for years. With over 40% of the total, the United States is the most important producing country. At 25%, Turkey follows. Iran, too, grows a decent amount of these nuts. China and Syria also have reasonable volumes.

Far more pistachio nuts are exported in-shell than shelled; 300,000 and 40,000 tons respectively. Of the in-shell pistachio exports, the US has a 50%+ share. That makes it, by far, the top exporter. Iran follows. The remaining exporters do not represent much of the share.

China is, at a distance, the top pistachio nut importer. Germany and transit country Hong Kong follow. The Netherlands is a very modest importer. It takes about 6,000 tons per year (shelled) with, by far, the most from the United States.

Brazil nuts: mainly from Bolivia and Brazil
Brazil nuts are a modest product with an unknown global production. But, commercially, this is not more than 100,000 tons. Most of these are grown in Brazil and Bolivia. Bolivia exports the most shelled Brazil nuts, by far. Peru follows.

Hazelnuts: Turkey tops the list
Last year, hazelnut production grew to more than a million tons. Two-thirds of these were produced in Turkey, with Italy in second place. Turkey is also, by far, the most important exporter. In 2021, it exported 155,000 tons of shelled hazelnuts.

That is 60% of the world's total. Most of the importing countries are in Europe; Germany, Italy, and France, with Russia as fourth. The Netherlands imports about 7,000 tons of shelled hazelnuts annually. Three-quarters from Turkey.

Macadamia nuts: mainly South Africa
Macadamia nuts come mainly from South Africa. By volume, Australia is the other exporter. China and Hong Kong are the main in-shell importers. The United States takes the most shelled product. The Netherlands imports no more than 3,000 tons of shelled macadamia a year. Most of these come from Kenya, South Africa, and Australia.

Click here for the complete (Dutch) document from Fruit and Vegetable Facts.