The Netherlands' 2021 agricultural exports are estimated at a record €104.7 billion. That is what Wageningen University & Research (WUR) and the Central Bureau of Statistics (CBS) report. This report is based on joint research commissioned by the Ministry of Agriculture, Nature, and Food Quality (LNV).

These exports were €9 billion (9.4%) higher than in 2020. This growth is due to both an increase in prices and export volumes. Prices rose slightly more than the volumes. These estimated €104.7 billion's worth of agriculture exports consists of €75.7 billion of Dutch-made goods. Re-exports of foreign-made agricultural goods amounted to €29 billion. In 2021, 10.7% more Dutch-made goods were exported than the previous year. Re-exports grew by 6.1%.

The Dutch economy earned an estimated €46.1 billion from these experts. Of this, €42.1 billion was from exports of Dutch-made goods and €4 billion from re-exports. 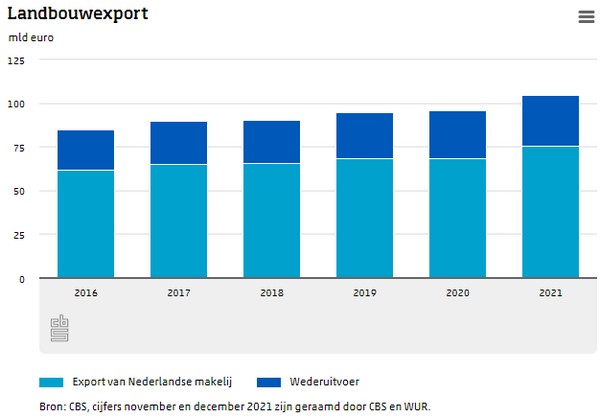 Exports to that destination have stagnated. Since January 1, 2021, it has become more attractive to ship goods from outside the European Union directly to the UK, not through the Netherlands. That is due to import duties. Dutch agricultural exports to the UK actually grew substantially, by 14%, in 2021. However, many British animal and plant products inspections have been postponed until later this year, as have various customs formalities. Those should affect Dutch agricultural exports to the United Kingdom. 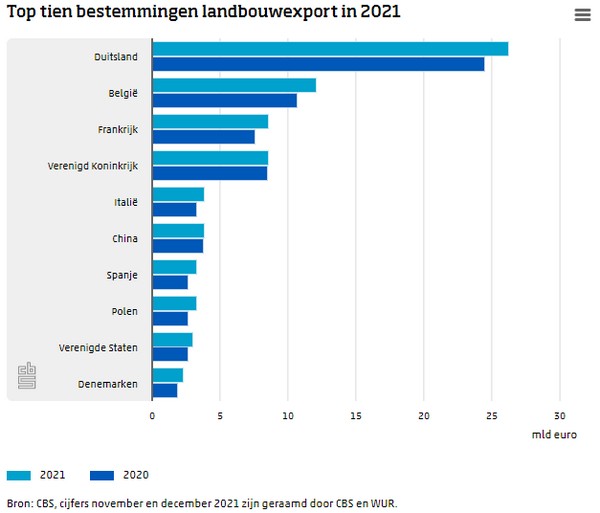 Ornamental plant exports increase by 25%
As in previous years, ornamental horticulture (flowers, plants, bulbs, and nursery products) topped agricultural export products, value-wise. In 2021, €12 billion's worth of these products were exported. That is a quarter more than in 2020. This increase is largely due to last year's significant rise in flower and plant prices. In 2020, the Netherlands exported €9.6 billion worth of ornamental plants. In 2019, it was €9.5 billion.

Meat comes in second. Meat exports increased by seven percent, from €8.5 billion in 2020 to €9.1 billion in 2021. All other major agricultural goods recorded export growths too. Only grain, flour, and milk preparation exports shrank. One reason for this is the sharp decline in exports of baby milk powder to China. 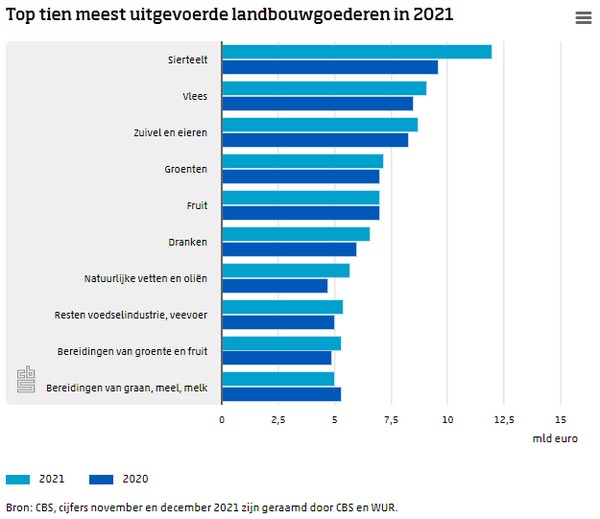 Organic trade
There is increased attention to how traded goods are produced. This can involve social issues, such as child labor, poor working conditions, and slavery. But also environmental issues, like the climate and biodiversity. The European Commission should publish a directive in March 2022. It will require companies in the European Union to conduct business responsibly.

Current (trade) statistics contain disparate information about this. However, there is import data on this for organic products. It shows that, from 2018 to 2020, 1.5% of the EU's total import volume was organic. Bananas and cattle feed are the largest import flows. And Ecuador is the main supplying country. Within the European Union, the Netherlands imports the most organic products from third countries.