Cultivated mushrooms from Germany are more in demand than ever. This trend towards regional mushrooms and mushroom exotics has accelerated noticeably since the Corona outbreak, observes Dieter Dömges, joint managing director of Pilzhof Nettetal & Co. Brown mushrooms are seeing very strong advances, says the producer and trader.

"There has already been a slow trend toward mushroom exotics for several years. Oyster mushrooms and king trumpet mushrooms in particular are enjoying increasing demand, while demand for shiitake seems to be stabilizing," says Dömges. "Brown mushrooms, meanwhile, have seen a noticeable increase in demand, which has led to some shortages in the market." Growing brown mushrooms, as well as picking them, is easier compared to the white equivalent, and the crop is less sensitive, he said. "The yield per square meter, on the other hand, is lower, which is why brown mushrooms ultimately fetch a higher market price compared to white ones." 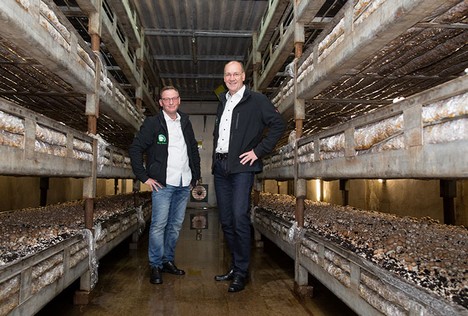 Within production, the percentage ratios between brown and white are now 60-40. Dömges: "In food retail, brown mushrooms are way out in front, but in the catering trade, white ones are still more in demand. Among the brown ones, especially the 40-50 calibers are well received by consumers, while minis are rather rare in contrast to the white ones." 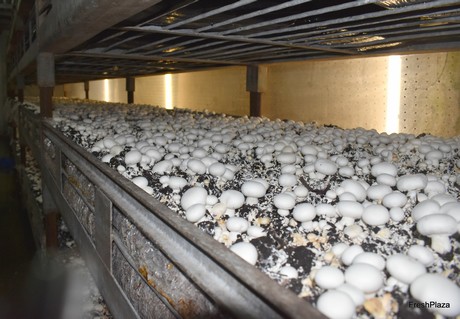 Growing clientele at Fresh Park
Pilzhof Nettetal was founded in 1958, and the business has existed as a registered company for just under 5 years. In addition to the production site and headquarters in Nettetal, the company operates a sales stand at the nearby Fresh Park Venlo, called GoChamp. "In recent years, many smaller growers in the Dutch border area have disappeared, and we were able to win over a significant part of their customers," says Dömges. 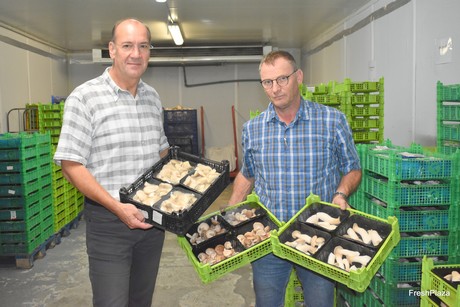 The management team during a Freshplaza company visit in 2019.

Parallel to the growing clientele, the production facilities at the Nettetal site were also modernized accordingly. "We have invested a lot in cultivation technology, such as temperature and humidity controls, to be able to increase the yield of our mushroom exotics. We have been using the technology since December last year and the initial results are promising," Dömges explains. 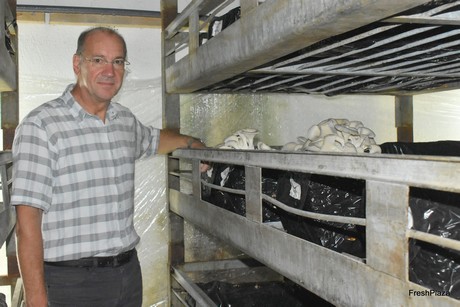 Dieter Dömges in the cultivation room.

Loose cultivated mushrooms in food retailing
In addition, the topics of marketing and product packaging have also been increasingly tackled. "In terms of regionality, we are taking a step further toward localness. That means we now only supply LEH stores within a 50km delivery radius. Packaging also remains an exciting topic. The legal increase in minimum wages to 12 euros/hour, which has to be compensated for somewhere, makes things even more difficult. Bucking the trend, we are tending to deliver more loose cultivated mushrooms to food retailers and sales figures have been very satisfactory so far."