Affected by the pandemic, the government in Hong Kong has tightened the measures for air freight, affecting the arrival of foreign ingredients and fresh fruits. Some fresh fruit importers in Hong Kong pointed out that it is currently impossible to send fruits directly to Hong Kong from the place of origin, which has increased the cost and halved the import volume compared to previous years.

Many fresh fruits are imported by air, and the cost of transportation increases as the government tightened the measures. For example, Australian fresh fruits used to be able to fly directly to Hong Kong from the production areas, but now they have to be transported to Sydney first and then to Hong Kong. 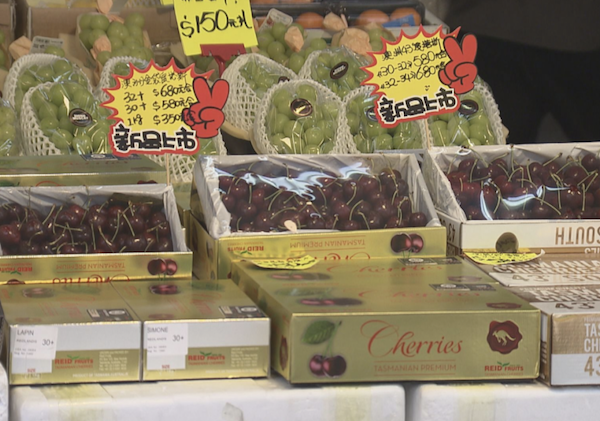 Some wholesalers said that in the case of Tasmanian cherries, the price of good-quality fruits has risen from 500 to 700 yuan per box in the past to 700 to 1000 yuan. This cut the shipments in half compared to previous years.

Zhang Kaijie, an importer of fresh fruits said, "In previous years, for every four boxes (cherries) picked from the farm, one box sent to Hong Kong. This year, because the cost is too high, the sales of cherries are not good after arrival, and it is very miserable for us to be sandwiched in the middle when cutting the price for promotion. ”

Some restaurants said that the ban on dine-in in the late evening has been a big blow, coupled with the rising cost of raw ingredients. It is worrying that many restaurants will be bankrupt after the Chinese New Year.