First vegan textile from persimmon and replacement for animal leather

In the last five years, the Spanish persimmon harvest has undergone an exponential development, causing the production to increase at exorbitant levels. This, together with the appearance of pests and diseases that are difficult to control, has led to more than 50% of the annual production becoming surpluses that are not marketed.

The Region of Valencia is the main producer of kakis in Spain, accounting for 85% of the fruit's national harvest. Valencia produces more than 300 million kilos of this fruit annually.

In view of this situation, the Valencian company Laserfood is launching the first vegan textile in Spain made from persimmons that could replace animal leather. The new product, PersiSKIN, made 100% from natural ingredients, thus offers a solution for the persimmon surplus in Valencian fields. 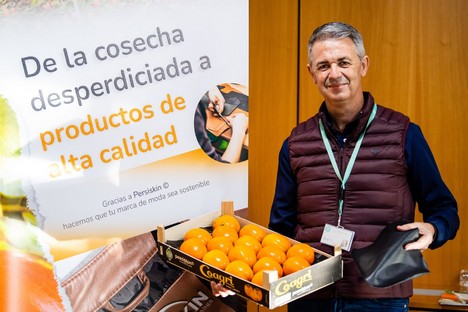 The company, which is currently involved in the initial product presentation phase, has invested €500,000 in the product patent and its development. In the coming months, "it is estimated that we will invest up to 2 million Euro in the production phase, which will begin in May of this year. In this second production phase, we will be able to open the first factory where the fabric will be produced and we will start marketing it," says Jaime Sanfelix, CEO of Laserfood.

This new fabric is therefore environmentally-friendly and sustainable, and is contributing to the circular economy of the region supplying the raw material.

A new industrial sector
"The main purpose of the textile product we have created is the establishment of a new industrial sector that will allow the full use of the waste and surpluses generated in the production of persimmon, giving the fruit a new life as raw material," says Sanfelix. "We are thus trying to provide a solution to the current situation of Valencian growers, adding value to a production that is currently not marketed."

The company also seeks to create an auxiliary sector for the use of the new textile in the persimmon-producing area, such as leather goods workshops, clothing and footwear manufacturing, etc., which would help generate hundreds of new jobs. For his part, Cirilo Arnandis, president of the Agricultural Cooperative Nuestra Señora del Oreto de L'Alcúdia and of the Designation of Origin Kaki Ribera del Xúquer, stresses that "this project can offer an interesting outlet for part of the production from our companies that cannot be marketed fresh and is also failing to reach the processing lines for the production of juices and other derivatives."

Arnandis also says that "the use of less suitable products from a commercial perspective and of persimmon waste can become an additional source of income, complementing fresh marketing and helping improve the sustainability of our sector and the income of producers." 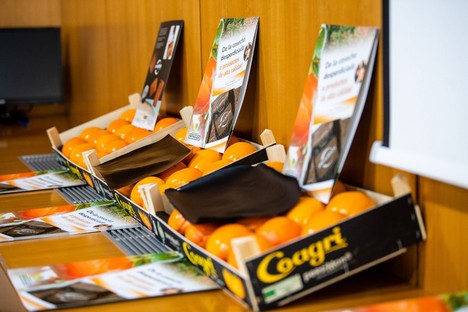 This new product has been created with the participation of AITEX, a leading national center for research, innovation and advanced technical services for textile companies. The project has also been financed with CDTI public funds and, for the most part, by the company's own funds. "Financing will continue to be necessary for the next phases of production and company sizing that will take place throughout this new year," said the company's CEO.

Laserfood, constantly willing to promote the indelible marking technology developed by the company in 2006, promoted together with the EU the Laser Mark project for the laser branding of fruits, demonstrating that the use of this new technology reduced the carbon footprint generated by the use of labels by 99.9%.

Laserfood is currently doing business in more than 10 countries. In its expansion stage, the company has launched new projects such as PersiSKIN, an initiative that seeks to provide a solution to the persimmon surplus in the Region of Valencia through the manufacture of a vegan replacement for animal skin made 85% out of persimmon.