“SNFL follows a conservative approach in South Africa,” says general manager Hein Koch, “because farmers can’t be taking chances. By the time we roll out a cultivar, we have to be certain: it will achieve success and we will be profitable.”

Every successive season continues to renew the faith growers have in the top four SNFL grape cultivars – Allison™ and Timco™, on the red side, and Ivory™ and Timpson™ on the white – that are available to South African growers. 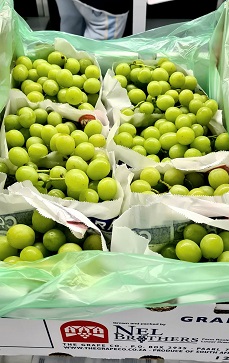 It helps enormously, he points out, that the market knows and really likes these cultivars and that they are on the preferred varietal lists of all retailers.

While SNFL is still investigating cultivation techniques on their older cultivars like Melody™ , Krissy™ and Magenta™, those grapes being phased out and replaced by their new generation of grapes.

The Ivory™ harvest in the Orange River has just ended, now passing the baton to the Berg River and Olifants River regions, and in two weeks to the Hex River.

“The berry development and the yield of Ivory™ has really been excellent in the Orange River. Most of the producers came in above their estimates, and having those volumes available really throws marketing options wide open.”

Last year was more challenging, whereas this year the quality was less impacted by rain, he explains: this year the bunches had the chance to dry off between rain spells.

Five or six years ago, Hein remarks, Asia was very focused on appearance while now eating quality, along with appearance, has become critical, and the appearance of both the berries and the bunches of Ivory™ plus its slight Muscat note, offers exactly what Asian consumers are looking for.

And just to make sure that its high sugar levels won’t affect storage, SNFL has left Ivory™ on the vine in their trial blocks outside Wellington to investigate the performance of late-harvested grapes and the possible development of browning, but fortunately there was no sign of that.

Ivory™ on the vine (photos supplied by SNFL)

All four of SNFL’s top cultivars are strong grapes, suitable to the cold steri markets of the USA and China.

From a production point of view, Ivory™ and their other top cultivars define what SNFL expects from a cultivar: It has to farm easily, not be too labour-intensive and deliver exceptional eating experience both on flavour and texture.

SNFL Group’s innovation pipeline is dedicated and focused on delivering elite attributes on both flavour and texture and additionally breeding new cultivars which are both resistant to plant diseases (requiring significantly less pesticides and treatments) as well as cultivars with high health attributes.

“Timco™ from Namibia has had an equally good season,” Hein says, “with very good berry size, so we’ll be packing good weights.”

Namibia has had a good Timco™ season

In Namibia, where Ivory™, Timco™ and Timpson™ are planted (not Allison™), the yields on older cultivars this season have again thrown the productivity of new cultivars into sharp relief and growers have put in orders for more of these cultivars.

Allison™, the most planted SNFL variety worldwide (followed by Ivory), is another variety that SNFL is watching closely. 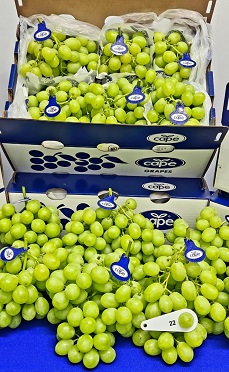 Koch Malherbe, SNFL technical manager, visits all of the blocks of SNFL cultivars growing in South Africa and Namibia.

Timpson™’s unique feature is its prominent Muscat flavour, a taste profile sought after by UK retail and clients in Southern Europe.

"Over the last year we have seen growing volumes of Timpson™ being shipped into China," Hein remarks.

“We are allocating on a grower-specific and an exporter-specific basis to add value to the cultivar. At the end of the day, the more value you can add, the better the producer performs back on the farm."