Federation of Fruit and Vegetables of Occitania

Since August 2020, there have been a multitude of reports in France revealing the worrying emergence of devil bugs (Halyomorpha halys), especially in French orchards.

This stinging-sucking insect causes damage to fruit and vegetables in particular. The sting can create just a small mark, but it can also cause deformation or necrosis. Without natural predators, it is highly probable that the number of attacks will increase on many species and in all French production basins, which could lead to 20 to 80% of damage on the harvested fruits, as well as serious economic consequences, like in the United States or Italy.

A lot of research and experimentation work has been set up in France in 2021. In order to facilitate exchanges and better fight against this nuisance, the Federation of Fruit and Vegetables of Occitania has created, with several partners, a national trapping network to monitor the dynamics of these bugs. The data helps to better understand the biology of this pest and to test the efficiency of various trapping models proposed on the market.

123 traps have been monitored in nearly 23 French departments by 45 partners (Chambers of Agriculture, Ceta, Fredon, INRAe…).

The French departments most affected by the devil bug were the Savoie, Tarn, Vaucluse and Bouches du Rhône departments. The species that suffered the most damage is the pear, followed by the apple, kiwi, hazelnut and the peach.

The network has tested various traps: Diablex, adhesive plate, adhesive panel, Agbio and several pheromones: Trécé, Progarein and Bioprox. Trécé proved to be the most efficient pheromone, followed by the combination Diablex+Trécé, as the adhesive plate increases the trapping. 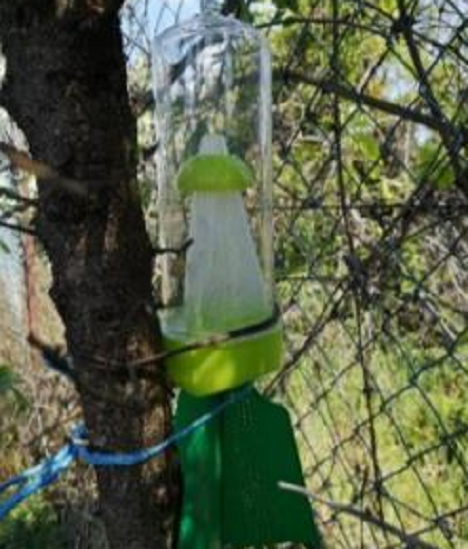 The adhesive panels help trap very large quantities and could be useful for mass trapping at certain times in the cycle (in autumn for example). This network and the monitoring of these traps has helped refine understanding of the biological cycle of this pest in France.

It shows the emergence of the adults from late May to late June, the hatching of the larvae from the end of June until the end of September, with a peak around the 15th of August. (Chemical) control is recommended during these two periods, especially when the larvae hatch.

A website dedicated to the devil bug https://punaisesdiaboliques.com was developed in 2021. It gathers all the data from these networks as well as the latest findings.