"Sales are not quite at last year's level due to the restrictions in the restaurant industry, but we can't complain too much due to the growth in retail sales," Heep says. "In our operation, it's true that some of the positions that became vacant were not filled, because overall there was a natural turnover of personnel. We also fortunately didn't have to lay anyone off or put them on short-time work." 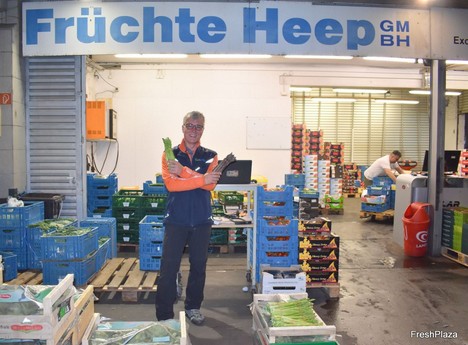 Price increase of 20-30% for lettuces
"Colorful lettuces like Lollo Rosso, Bionda and red as well as green oak leaf lettuces from the Châteaurenard region in southern France are selling very well right now. We receive about 2 to 3 truckloads of these per week, which corresponds to about 80-100 pallets. The lettuces come from both field, tunnel and greenhouse crops." Prices are 20-30% higher than in previous years, he said, which is also related to the fact that in the last two years a great many growers had to destroy their produce because they could no longer market it due to the closure of the catering industry. Also contributing are higher costs for fertilizers and pesticides, as well as personnel and energy.

"Sales collapsed by 50% in the food service industry in the winter of 2020/21 due to the lockdown. The products that had to be destroyed because of this, of course, also caused additional costs. Seeds and plants, after all, have to be purchased, watered and maintained. The volumes that were planted have dropped significantly, and producers now have to command higher prices," says Heep. Although there have been occasional difficulties with transport, he says this should not be seen as particularly detrimental.

Mood at the Cologne wholesale market
"At the end of 2025, the wholesale market is scheduled to close. A fact that hangs over us like a sword of Damocles. We have been living with this situation for years, which means that neither our nor the city's infrastructure can be improved. Necessary investments can no longer be made, because for the remaining time these investments would not pay off. After all, the demands made on a fruit and vegetable wholesaler today have also changed fundamentally since the wholesale market was founded 60 years ago," Heep says.

"A metropolis like Cologne needs a wholesale market for free trade. We serve a clientele that large corporations cannot cover. Our customers are within a radius of over 100 km around the city of Cologne. Preferably, therefore, a catchment area of Cologne in Frechen or Marsdorf would be desirable as an alternative. Of course, we also depend on the wholesale market and on the contact with wholesalers and retailers, who can buy many products from us that cannot be found elsewhere, in addition to the large standard assortment. No matter whether it's exotics or certain specialties for which we are especially known for almost 50 years on the wholesale market in Cologne. We would certainly also be able to exist on our own without the wholesale market, but then with a correspondingly modified business model. The planning meeting for the new wholesale market, which was planned for January, has unfortunately been postponed for the time being due to current events," Heep concludes.