The radish trade is currently a little quiet, says John Grootscholten of Daily Fresh Radish in the Netherlands. "There's usually always shortages and good demand in January. That's a little disappointing, as of now. In December, prices were a bit higher. But aside from a few weeks, winter has generally been somewhat sluggish."

"The trend has also been changing in recent years. Summers could be dead-quiet. Then, in the winter, prices would sometimes go through the roof. Now there are no longer those peaks and troughs. Ultimately, of course, that's beneficial. Now we have far more radishes in the summer."

In winter, Germany is an important market. "In the summer, they have locally-grown radishes. But not in winter. So, they import, mainly from Italy and the Netherlands. In the summer we export mainly to the other countries. These include Belgium, the United Kingdom, Scandinavia, and France. Germany is then self-sufficient," says John. 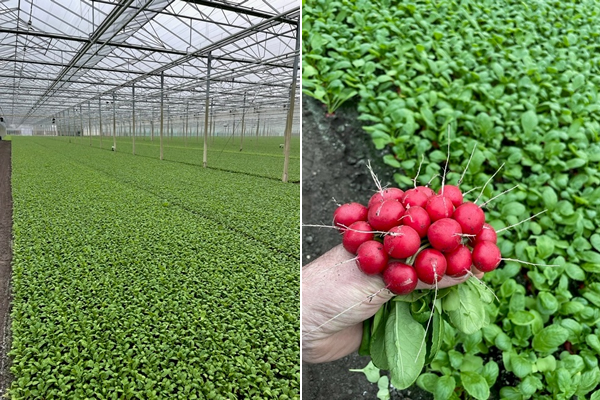 The 'garden' and a radish bunch on a dark winter's day.

"Italy is a formidable competitor on the German market in the winter. You're therefore having constant price discussions. Most of Italy's supply consists of radish bunches. Sometimes Italy can't deliver enough, due to the weather or other reason. Then we quickly sell out. Morocco and Israel also have radishes on the market in winter. But those are loose."

John says the radish quality is good. "The leaves are a little weak at the moment. We're now bunching the radishes we'd sowed ten weeks ago. In other years, some of the winter days were sunnier. But in the past months, we've had a lot of rain and dark, grey days. So I'd be lying if I said the crop was very strong. There's nothing wrong with the radishes; the leaves just aren't as strong as in summer."

The Dutch radish acreage is similar to last year. According to John, energy prices have significantly affected this product. "Admittedly, not as much as with a pot plant growers. They have to heat to 25°C. But those crops also sell for much more than radishes. Our turnover/margin to pay those extra costs is much lower."

The radish grower is, nonetheless, optimistic about 2022. "In recent years, spring and summer were already better than the winter. In the winter, you're stuck with an expensive crop. It remains in the ground for a long time. But it grows much faster in the summer, and there's more demand. Also, healthy eating is on the rise. Last week, it was announced that last year's fruit and vegetable sales had risen three percent. If that growth can continue, the radish market, too, will benefit," John concludes.