A joint position against the high costs of musaceae production, and actions to fight against the phytosanitary threat of Fusarium Race 4 Tropical (Foc R4T) were agreed to by the Ministers of Agriculture of Colombia, Costa Rica, Guatemala, Honduras, Panama and the Dominican Republic. Collectively, they participated in the Latin American Summit for Banana Unity, convened by the Minister of Agriculture and Livestock of Ecuador, Pedro Álava. 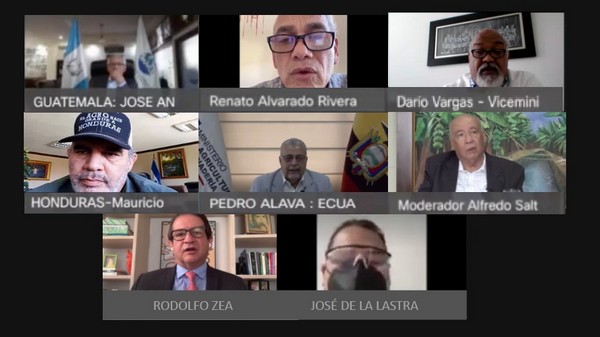 The ministers of the seven Latin American countries that produce and export bananas and other musaceae agreed:

Álava says it is necessary "to constitute a robust common front before importers, supermarkets and shipping companies and demanding they assume the price increases at this time. Only in this way would the validity of shared social responsibility be understood as a moral obligation of all segments and not that the cargo is transferred only to producers and exporters."

Rodolfo Zea, Minister of Agriculture and Rural Development of Colombia, stressed the need to create a joint dialogue with the countries buying musacea, especially the European Union.
Renato Alvarado, Minister of Agriculture and Livestock of Costa Rica, suggested dialogue with shipping companies and working on fair trade throughout the distribution chain.

José Ángel López Camposeco, Minister of Agriculture, Livestock and Food of Guatemala, supported creating a working group to search for alternative ideas in the chain. "If the actions are not sustainable, banana production and food security are put at risk."

Mauricio Guevara, Secretary of State in the Offices of Agriculture and Livestock of Honduras, noted the increase in fertilizer costs are not making production sustainable, in addition to the effects it has on producers while José de la Lastra, National Director of Bananas of Panama, supported this. Meanwhile, Dario Vargas, Vice Minister of Extension and Training of the Ministry of Agriculture of the Dominican Republic, made available to Latin American countries varieties of musaceae that are resistant to climate change, droughts and hurricanes.