Egypt is committed to doubling its citrus exports

China is the fourth largest market for Egyptian citrus

Recently, Khatimu Najib, the vice president of the Vegetable and Fruit Branch of the Cairo Chamber of Commerce in Egypt, pointed out that in the past few years, large-scale agricultural projects invested in Egypt have effectively increased its production. Egyptian dates have performed particularly prominently, and it is expected that the production and the needs of diversified date varieties will increase in the future. 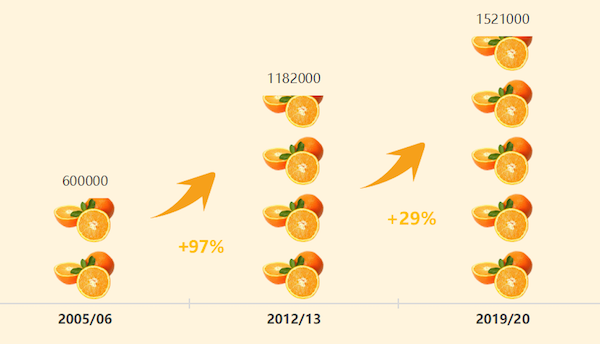 In addition, the export of Egyptian citrus has increased to 5.6 million tonnes. Khatimu Najib said that the government will also continue to expand its investment in agricultural projects. In the future, production will increase and the export will expand continuously.

Egypt is the world's leading citrus exporter showing a rapid growth of exports in recent years. In 2005/06, the export volume of Egyptian citrus was 600,000 tonnes, and seven years later, it had doubled to 1.182 million tonnes. The total export volume in 2019/2020 increased by 29% based on the volume from the previous five years and it reached 1.52 million tonnes. Egypt is actively expanding its market at the moment and is committed to doubling its citrus export volume.