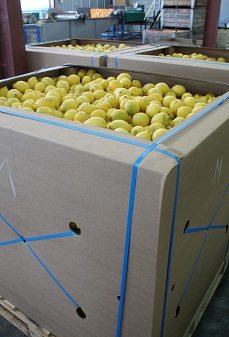 The South African lemon juice industry received notice on 6 January that Californian citrus juice producer Ventura Coastal had lodged a petition with the US Government, seeking antidumping duties against lemon juice concentrate from Brazil and South Africa. The complaint does not concern fresh lemons.

Right: a bin of processing lemons

US lemon juice manufacturers have in the past called for the same measures against Argentine and Mexican lemon juice concentrate.

“On the one hand it’s come as quite a big surprise to us but on the other we will cooperate fully with the US authorities,” says Rudi Richards, general manager of the South African Fruit Juice Association.

“We’re not in the business of dumping product and there’s no point in dumping below your cost, as you’re not going to be making any money. Our objective is to achieve the best possible prices.”

He notes, however, the attractiveness of the US market for lemon juice concentrate exports, whose potential could be dashed if antidumping duties (a figure of 128% has been mentioned) were introduced. Currently, there is a low tariff on South African lemon juice concentrate entering the USA under the AGOA Act which gives South Africa preferential treatment as trading partner.

Richards says that the South African circumstances in this matter could be very different from Brazil's, which is the world’s biggest orange juice producer.

“The way these antidumping legal processes go, we could be in for a long haul here,” he cautions. Already some South African lemon juice producers have observed that their legal costs in this matter could exceed their turnover on lemon juice exports to the USA.