After two successive years of hail damage to the Kuri pumpkin crop, they are truly relieved to report close to perfect weather conditions and no hail thus far this year, says Paul Roos Jr, director at OrganoGroup, an organic fruit and vegetable grower on top of the Waterberg mountain in Limpopo.

Most of the certified organic Kuri or Hokkaido pumpkins are still on the fields, most of their larger pumpkins ending up at Dutch and German retailers and the smaller ones in Scandinavia.

The crop is peaking at around 800g to 1.8kg, the largest part of the spectrum. 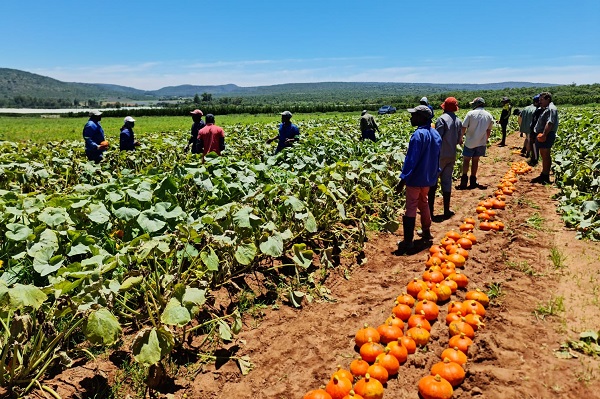 With smaller bins, pumpkins are handled only once
OrganoGroup is using a new bin system for the pumpkins (the only member of the cucurbit family they’re growing) this year: instead of two larger bins, they use three stacked bins and the quality from the smaller bins are definitely higher, he says.

“The pumpkins are harvested into these bins in the field, taken to the packhouse and loaded out in these bins, which means they were handled only once,” he adds.

The first few containers of Kuri pumpkins were sent out from Cape Town while the next will probably leave from Durban, hence transit time is a week longer to Europe than from Cape Town. 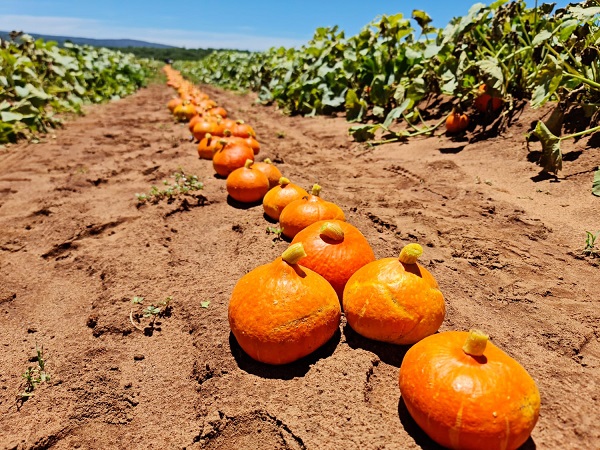 Durban is more cost-effective for them, based in central Limpopo, but sometimes the thought of the short transit time from Cape Town is reassuring.

They have almost finished planting their organic sweet potatoes, local white-fleshed cultivar Blesbok for domestic high-end retail and Beauregard for export to Europe and England.

“When dealing with exporting bulk commodities like sweet potatoes you need efficiency in everything you do. On yield, on packouts, on all of those you need to hit your targets.” 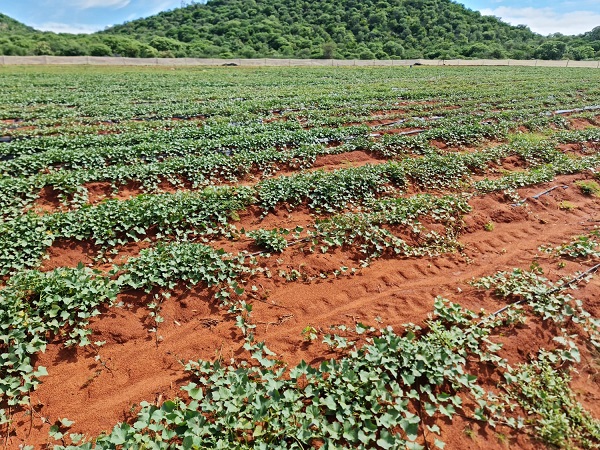 A field of organic sweet potato: the Blesbok variety for the domestic market, Beauregard for export

He continues that the logistical efficiencies of exporting bulk commodities is another factor they consider closely; for the moment they are still sending the sweet potatoes in 6kg cartons. 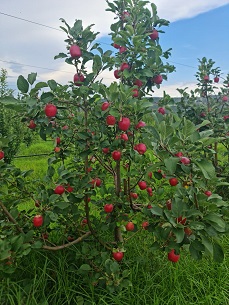 They only plant the Agricultural Research Council’s Afri range of apples (right), the earliest on the market, before Royal Gala.

The season has progressed very well, demand for apples dipping a bit post-Christmas but expected to pick up again this week.

Late frosts at the end of August and the beginning of September which have been devastating to apple blossoms during previous seasons, didn’t occur this past early spring.

They take no chances when a late-winter cold front approaches, working throughout the night to circulate air and increase the relative humidity within the orchards to avoid cold damage.

“The colour on our apples is better and overall quality is better than we usually see, and it’s been, in part, because of a cold winter.”