VOG is one of the "100 eccellenze italiane"

Recently, the national award "100 eccellenze italiane" was presented at the Capitol in Rome. Among the winners of the prestigious award was the Association of South Tyrolean Fruit Cooperatives (VOG). 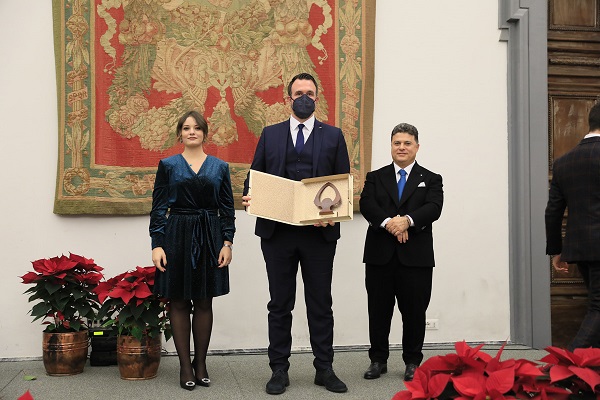 Hannes Tauber, Head of Marketing at VOG, received the award on behalf of the company. Photo: VOG.

The "100 eccellenze italiane" award goes to companies that have made a special contribution to the economic and social development of the country. It is supported by the Italian Ministries of Labor, Health and Agriculture, among others. This year, the prize was awarded for the seventh time - VOG was represented among the winners for the first time and can now call itself a "company that has contributed with its commitment to making the values of 'Made in Italy' known and successfully communicating them to the outside world."

In addition to VOG, Italian personalities from a wide range of sectors, such as ex-Formula 1 driver Giancarlo Fisichella and actress Tosca D'Aquino, were among the award winners. Other well-known companies such as "Unitec" and "QC Terme" were also honored.

Award as a sign of appreciation for VOG farmers
VOG Director Walter Pardatscher sees the award as recognition for the work of the association's farmers: "It is a great pleasure for VOG to receive this award. The prize underlines that the great commitment of our 4,600 family farms, which form the heart of our association, is also appreciated nationally. It also shows once again that values such as quality, innovation and sustainability pay off. These values have always distinguished VOG."

The winning companies are determined according to strict selection criteria set by the "Osservatorio delle Eccellenze Italiane" observatory of the "RDE" publishing house. An honorary committee made up of representatives from various industries oversees the applications and the presentation of the awards. This year the committee was chaired by the Attorney General of the Court of Audit, Dr. Angelo Canale.