The start of the Spanish orange campaign was marked by the overlap with the fruit of the southern hemisphere, an abundance of small sizes, increased production and handling costs, and logistics problems for exports over long distances. These are the main complications that the campaign has faced since the harvest began in the main producing areas at the end of October.

The orange harvest is somewhat higher than last season, unlike the clementines, which have suffered a significant reduction in the Clemenules variety. 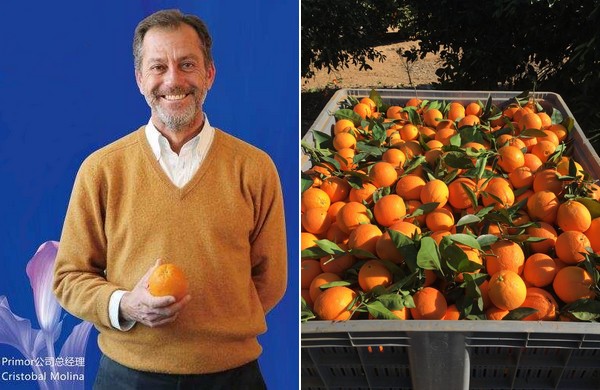 The lack of size: the most determining factor of the 2021/2022 orange campaign
"The increase in production costs is tightening profit margins due to price pressure on small-caliber fruit, which this year is the most abundant fruit in Andalusia and in the Valencian Community, the main producing areas in Spain,” stated Cristobal Molina, the president of the Sevillian company SAT Sintesis, which produces and markets around 12 million kilos of oranges and grapefruits that are grown in Huelva, Seville, and Cordoba, and specializes in long-distance exports to different destinations, such as Canada, the Middle East, and the Far East.

“Good-sized quality Navelina oranges, i.e. calibers 1, 2, and 3, are reaching the correct prices of between 20 and 24 cents per kilo on the tree because they are quite sought after in the markets. Meanwhile, the smaller-sized fruit, i.e. ranges 4 to 6, is condemned by its oversupply with prices that go from 8 to 12 cents on average. There is an irregularity of calibers in almost all farms and more than 70% of the production is of small calibers. The Navelina harvest is coming to an end and producers are starting to harvest the first Navels. Then they will continue with Lane, Lane Late, Navel Powel, Barnfield, Chislett, etc. The small size issue affects all orange varieties in general, including the group of white varieties such as the Salustianas, which have even more size problems. It's going to be a low-caliber campaign from start to finish.”

"An improvement of the pandemic and logistical problems would allow us to recover the Chinese market"
Orange exports to countries outside the European Union fell dramatically in the 2020/2021 season due to the difficulties faced by logistics at a global level, especially in China, one of the markets in which SAT Synthesis has positioned itself in recent years.

“We were among the first to position ourselves in the Chinese market because we have our own delegation in that country and we send our oranges directly to them so that they distribute them to different clients, unlike other exporters, who send their fruit through Chinese intermediaries,” stated the president of the company.

“There was already a downward trend in the 2019/2020 campaign, but shipments to China almost completely stopped last season, due to limitations on imports in Chinese ports as a containment measure for COVID, something that was somewhat compensated by the increase in exports to the Middle East, especially to the United Arab Emirates, which is increasingly demanding more Spanish oranges,” stated Cristobal Molina.

Oranges are normally shipped to China in March, April, and May. “At present, we still don't know how logistics will be by then, although we are confident that we will be able to resume shipments. In fact, we have already registered our parcels to be able to make shipments to that country this campaign. We believe that the improvement of the pandemic and logistical problems would allow us to recover in China's brand-name market, which is so interesting in the second part of the season due to the high prices they pay for good quality fruit,” Cristobal Molina stated. The company exports its products to European countries, Canada, and the Middle East.

Competition with South Africa and Egypt is starting to be stifling
“South Africa had cargo problems and was late to Europe, causing a significant overlap with the start of our campaign. While this is a very specific issue of this campaign, we are seeing that the trend is this country is prolonging the end of its campaign. Then, at the end of January, Egypt will begin to send large quantities of oranges to international markets. Both origins are causing us to lose an important market share. It is an unequal fight because of the difference in phytosanitary restrictions we have to comply with. In addition, their production costs are lower because these countries pay lower wages than us," Cristobal Molina said.

"We are competing under different rules and we will have to find a way to continue competing by offering a product that stands out in quality and service. However, we'll need the help of the European authorities to protect Europe's production. At the moment, it seems that Spanish citrus continues to lead and that importers continue to look for Spanish exporters thanks to the country's mandarins and clementines,” he stated.