In the Netherlands, the Agricultural Growers Union (VTA) has done an initial ware potato stock take. It has concluded that these are well below last season (14.6%). They are also below the five-year average (11.3%).

Stock inventory yield figures
Growers who participated in this inventory had a 48.5 ton-average net yield per hectare. That is slightly lower than previously determined at the September trial harvests. Then, the average yield was estimated at 49.7 tons/hectare, the VTA reports.

These participants' yields varied from 34 to 64 tons per hectare. This is about five percent lower than last season. Combined with the acreage trend, the lower yields mean an 11% lower crop estimate. That is 10.5% down on the five-year average. 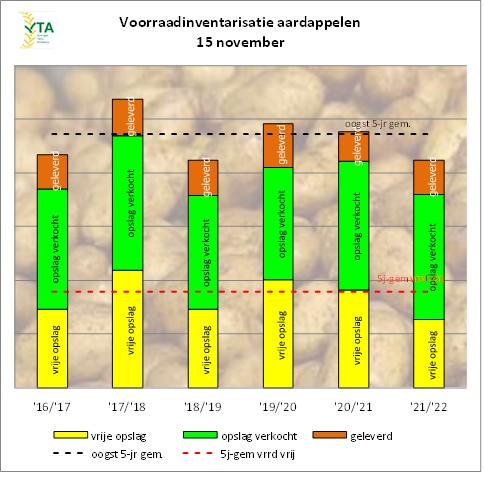 Relatively little delivered so far
By November, the stock-taking participants had delivered 14.9% of their harvests. In absolute tons, they delivered 16.2% more than last season (see chart). But, that is 5.3% less than the five-year average.

This permanent group of growers has an absolute stock. That is considerably lower (14.6%) than last season. It is also 11.3% less than the five-year average. Of the total stock, 65% has already been sold. Last year that was 57%. The free stock is therefore well below the five-year average.

First season' 21/'22 stock take
VTA inventories its members' potato stock three times a season. The first stocktake was done on November 15. A second and third round of inventories will follow in February and April.