One billion sterile flies a week – that is the production of the world’s second largest Mediterranean fruit fly facility, opened earlier this year, with support from the IAEA, in cooperation with the Food and Agriculture Organization of the United Nations (FAO). The factory of sterilized flies, located in the Chiapas state at its south-eastern border with Guatemala, will help keep the country’s growing agriculture pest free.

Mediterranean fruit flies lay their eggs in fruits and after they hatch, larvae feed on fruit pulp destroying it – and farmers’ livelihoods in the process. Keeping orchards fly free is a prerequisite for exports to many countries, which want to keep their own fruits un-infested. The alternative is expensive post-harvest treatments, which would hurt the competitiveness of Mexico’s export products. 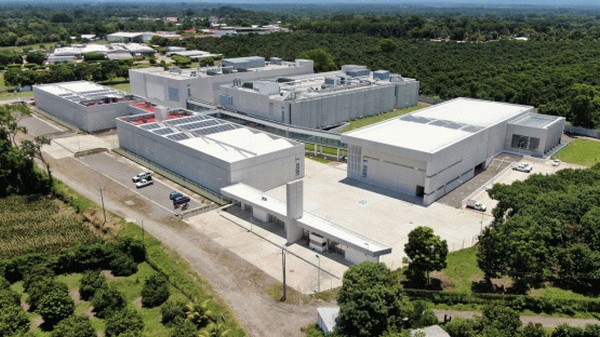 The new Mediterranean fruit fly mass-rearing and irradiation facility in Metapa de Dominguez, Mexico, will play a major role in keeping the country free of these insect pests. (Photo: SENASICA-SADER)

Sterilize male insects
An environmentally friendly method used in dozens of countries to keep fruit fly populations in check is the sterile insect technique (SIT), which uses irradiation to sterilize male insects. After being released these sterile insects will mate with wild females, but this mating will produce no offspring, thereby reducing pest populations over time. In order to prevent wild females from reproducing, hundreds of millions of sterile males need to be reared and released every day over the infested areas. The mass-rearing facility just opened is using the most advanced fruit fly production and sterilization techniques. Following the IAEA’s guidance, the new facility incorporated recent developments in design, such as having a glass ceiling and walls to allow more natural light for the adult flies in the mother colony area, which results in increased sexual competitiveness of the males once released. It was built in the vicinity of a facility, set-up in 1977 under the MOSCAMED Programme, a tri-patriate cooperation by Mexico, Guatemala and the United States.

The invasive fruit fly was eradicated in Mexico, thanks to the use of SIT, in 1982. The goal of the gigantic facility’s establishment is to consolidate the current containment barrier at Mexico’s border with Guatemala, and gradually eliminate Mediterranean fruit flies from Guatemala all the way south to Panama, in line with MOSCAMED’s long-term objectives. “The new facility will be instrumental in keeping the country free of this invasive pest, protecting and supporting sustained production and trade of fruit and vegetable commodities,” said Mexican President Andres Manuel Lopez Obrador at the inauguration. He noted that despite the COVID-19 pandemic, the agricultural sector in Mexico has continued to grow, and has remained a vital component of the country’s economy.

“When you have conditions that favor pest introductions and dispersal, you want to make sure that you have the means to face up to this changing situation: a facility that can guarantee the level of sterile fly production that you need and the quality of the insects to be released in the target area or in potential outbreaks that can occur elsewhere,” said Walther Enkerlin Hoeflich, Entomologist at the Joint FAO/IAEA Centre of Nuclear Techniques in Food and Agriculture.

“The new facility will guarantee the continuation of the use of the environmentally friendly SIT nuclear technology, strengthening the pest containment barrier, thus protecting the horticultural production in Mexico, Guatemala and also in the United States,” said Javier Trujillo, Mexico’s Head of the National Service for Agricultural Health, Food Safety and Quality (SENASICA).

Collaboration between Mexico and the IAEA Continues
Mexico’s National Fruit Fly Programme (PNMF) has been an IAEA Collaborating Centre since 2010 – supporting the IAEA in providing assistance on SIT to countries in the region, and the PNMF has now been redesignated as a Collaborating Centre for a further four years.

“Synergies between our institutions will allow a global multiplication of the impact of SIT and related technologies,” said Najat Mokhtar, Head of the IAEA’s Department of Nuclear Sciences and Applications. 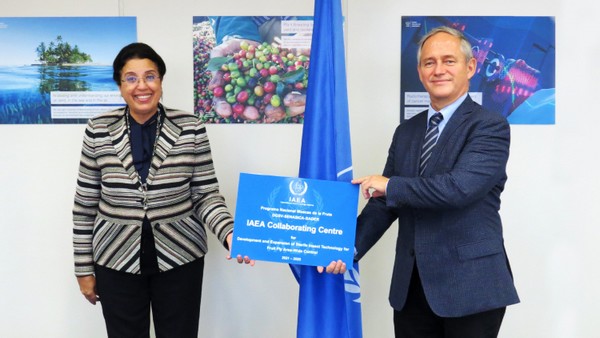 Through this cooperation, hundreds of professionals from Latin America, the Caribbean and other regions in the world have been trained in the application of SIT and the National Service for Agricultural Health, Food Safety and Quality (SENASICA) through PNMF has also helped the IAEA with research and development in advancing the technology, she added.

“The redesignation of PNMF-IAEA as an IAEA Collaborating Centre for another term will undoubtedly be a great opportunity for strengthening cooperation between Mexico and the IAEA, as well as multilateral collaboration in SIT technology for the benefit of many other countries,” said Luis Javier Campuzano Pina, Mexico’s Ambassador in Austria and Permanent Representative to the United Nations in Vienna.