Spanish navelinas had a larger presence that Italian, Turkish and Greek goods

Spanish navelinas had a larger presence that Italian, Turkish and Greek goods. Furthermore, navels from Spain and Morocco could be accessed on a small scale. The first Spanish Salustiana arrived in Frankfurt. There were Newhalls from Portugal and Italy as well. The availability of oranges had expanded and was sufficient to meet demand without problems.

Sales improved in some areas as a result of the wintry weather. However, no real price increases could be derived from this. Prices generally remained at their previous levels. Imports from overseas increasingly suffered from deficiencies. Goods from South Africa and Uruguay, for example, often had to be sold at a discount. 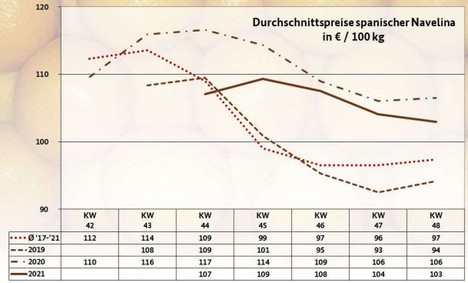 Apples
As usual at this time of the season, domestic lots continued to dominate events. Overall, the product range was widely diversified, although the availability of individual varieties was sometimes limited.

Pears
There was very little movement: the supply-demand situation nor the prices changed significantly.

Table grapes
The Italian season slowly entered the home stretch: Deliveries were apparently limited. Prices were mixed, with both increases and decreases.

Small citrus fruits
Deliveries of Spanish clementines gained in speed. Overall, demand was somewhat weak; building up stocks could hardly be prevented as a result of the massive Spanish influx.

Lemons
Spanish Primofiori dominated, more so than Turkish Enterdonato and Meyer lemons. The winter weather had stimulated the demand. It could nevertheless be satisfied without any problems.

Bananas
There was mixed activity in the market.

Cauliflower
Italian batches predominated, with French goods following in terms of importance. Demand was not particularly strong and was easily satisfied.

Lettuce
Iceberg lettuce came in exclusively from Spain. Demand was rather weak and was easily satisfied. The traders raised their prices in unison at the beginning of the week, only to successively lower them thereafter.

Cucumbers
Spanish cucumbers dominated, monopolizing the market at points. Belgian, Dutch and Moroccan deliveries had at most a supplementary character.