Simon Schumacher and Markus Kirn from VSSE on expoSE 2021:

"We are counting on the loyalty and fidelity of the trade"

On November 17 and 18, after a year's break due to Corona, the double trade fairs expoSE and expoDirekt again took place in Karlsruhe. As we reported, companies were positively surprised about the professional talks as well as the generally good mood. We spoke with managing director Simon Schumacher and board member Markus Kirn from the Verband Süddeutscher Spargel- und Erdbeeranbauer e.V. (VSSE) about their impressions of the trade fair, hoping to get the latest news from the asparagus and berry sector as well. 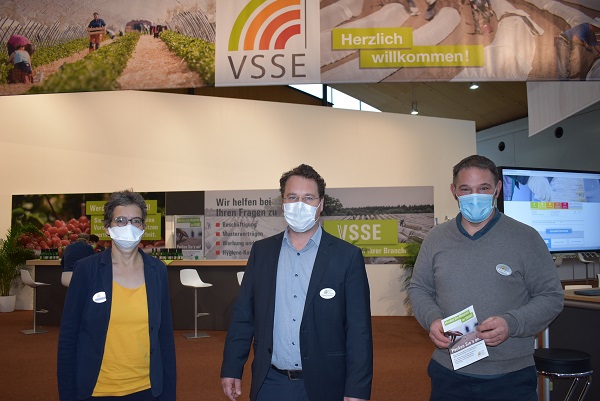 Isabelle Bohnert, Simon Schumacher and Markus Kirn from the VSSE

Benefits of the fair outweigh concerns
"Many show understanding for the 2G rule. Also, we are lucky that our target group is made up of farmers, as they are mostly vaccinated. They are very loyal partners as well," says Simon Schumacher. "The benefits of the exhibition outweigh the current concerns."

Although 15 exhibitors dropped out at short notice, the overall roll call is good. "Now, there are certain regions where there has been less vaccination. But the people who are here today really want to be here. They are visiting specific exhibitors, having in-depth discussions."

Good sales, new investments
According to Schumacher, the industry was also able to achieve good sales this year. Direct marketing results in particular were noticeably better. But political uncertainty is big now, in view of the coming 'traffic light coalition'. Markus Kirn also emphasized that with rising costs, the industry could not yet go 'full throttle' again either. "But we also have to dare to invest more, in order to be ready for both current and future challenges," says Kirn.

Schumacher agrees, pointing to new marketing strategies being discussed in the industry to also meet food retail standards. How the food retail industry in general will still adapt to the circumstances, remains to be seen. "But we are hoping for the loyalty of the retailers," says Schumacher. Although countries such as Serbia, Poland and the Netherlands would do good business with blueberries in particular, many, older varieties from Germany would remain. Says Schumacher: "Customers simply don't taste the difference."

Kirn spoke about a seminar in which ways were discussed to efficiently pass on key operating figures to respective managers. "The days of tally sheets and Excel spreadsheets are over. We have to adapt to new ways of communication and information," says Kirn. In line with this, Schumacher also talks about other advantages of trade shows like expoSE: "Regarding harvesting technology in particular, there is a certain pressure to create new technologies. For this, expoSE provides a glimpse into the future." From temperature measurement via apps to drone-controlled harvesting technologies, various innovations were presented that are likely to improve the daily lives of both growers and traders.

On the flip side, Schumacher and Kirn are concerned about the steadily decreasing number of farms. Since 2010, some 100 farms have ceased operations every year. In the case of strawberries and asparagus, around 2,000 farms are still active. Sometimes, however, farms are covering the same markets, as many asparagus growers have added strawberries to their range and vice versa. "That is why it remains important in the next ten years to adjust the production volumes to the demand, while increasing the demand at the same time," Schumacher conclludes.