At the beginning of November, the Golden PGI of the Alpes de Haute-Durance orchards was presented to wholesalers and commercial structures of the world’s largest fresh produce market. Rungis, a real showcase for the products of our French regions, turned out to be the ideal place to promote this apple and make it known. 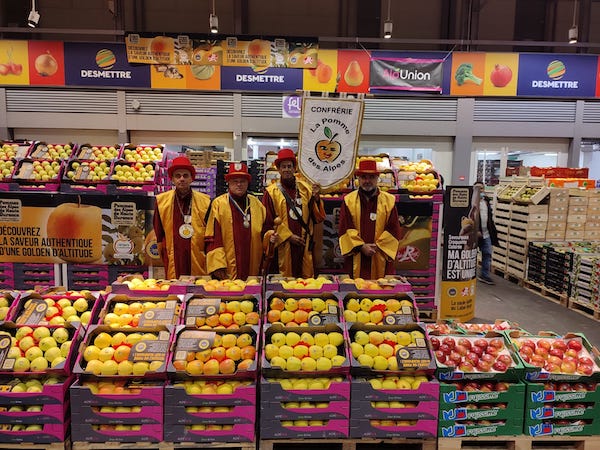 Promoting seven wholesalers on the Rungis market
The delegation for Rungis was made of 4 members of the Apple Brotherhood, producers and sales representatives of the different commercial structures of the production basin of this PGI, which amounted to about 20 people. The guests arrived in Paris by train the day before and after a very nice evening, they gathered up in the early hours, around 5am, for a visit of the Rungis market. Blue Whale, Alp’Union and Fruits et Compagnie had selected seven wholesalers for the visit: Desmettre, Desjardins, Chrono primeur, Mouneyrac, Monloup, Bratigny and Clément.

The visit took place in a friendly and festive atmosphere
The meeting with the wholesalers was the opportunity to talk about the quality and characteristics of the Golden PGI, the story of the Alpes de Haute-Durance apples and the history of the Brotherhood. The members of the Brotherhood, dressed in their festive clothes, were the element of surprise, strolling through the very busy market in a friendly and festive atmosphere. They were solicited many times to talk about the Brotherhood, which product it represents and the reasons for their visit to Rungis that day. The wholesalers all took pictures with the members of the Brotherhood and all seemed delighted with this special moment at their booth.

Some wholesalers had really made an effort to highlight the Golden PGI. Some hosts were also present to make customers taste the apple.

Constructive exchanges between producers and wholesalers
As for the producers who came to the event, they were surprised by the size of the Rungis market and the multitude of products on offer. This visit was also an opportunity for them to reaffirm their position as producers in a highly competitive context and meeting with the wholesalers who sell their apples was also very constructive.

The day ended at the restaurant with a meal shared with the same wholesalers. The members of the Brotherhood took advantage of the situation to induct its last three members: Alexandre Dorison of Monloup for Fruits et Compagnie, Joseph Desmettre of Desmettre for Alp’Union and Jérôme Chazelay of Bratigny for Blue Whale. A diploma and a trophy were presented to them to congratulate them for their involvement in marketing of the Golden PGI. 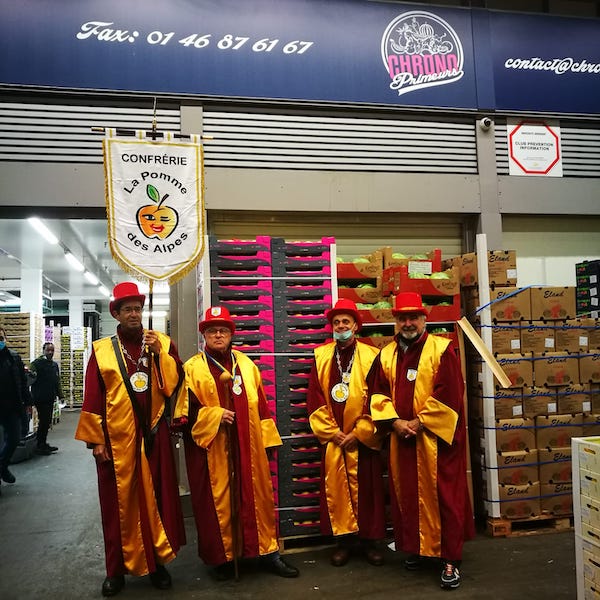 An apple grown on 1,200 hectares of orchards by 90 producers
The president of the PGI, Marie-Pierre Liautaud, recalled in her speech some figures concerning the PGI and Red Label. The apple of the Alpes de Haute-Durance is grown by 90 producers, on 1,200 ha of orchards spread over two departments (Alpes-de-Haute-Provence and Hautes-Alpes). It is also an apple whose Brix degree is higher than 12. A firmness of 5 for the 2-3 colorations, then 4 for the 3-4 colorations. She also recalled that the Thiault Index - a combination of refractometric index (sugar content) and acidity for the Red Label should be above 180 before November 1st, above 175 from November 1st to November 31st, and above 170 after December 1st.

The day ended with the viewing of the new PAHD film, shot this year with producers who express their attachment to the orchards and present the PGI apple of the Haute-Durance orchards. 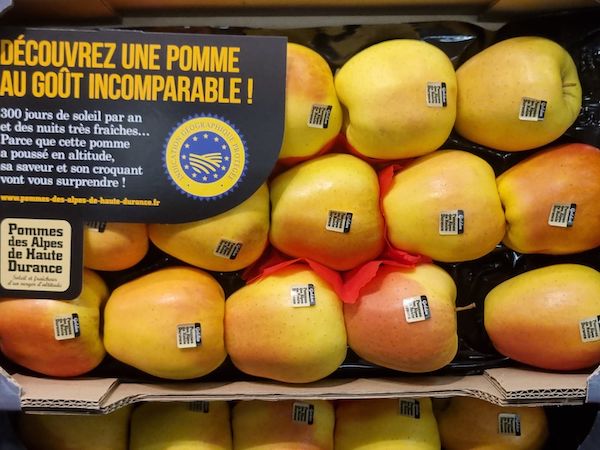 Good volumes despite the difficult season
For this harvest, all the committed producers meet the desired organoleptic criteria. Marie-Pierre Liautaud also recalled that this year, in spite of the difficult pedoclimatic conditions for fruit growers, the volumes of Golden GPI are good with a particularly marked coloration revealing a pronounced pinkish veil.