'Looking at iceberg lettuces; they almost exclusively came from Spain'

Regarding lettuces; the domestic season was nearing its conclusion. Deliveries were winding down, Belgian shipments outweighed the Italian ones. The latter were, however, cheaper and could therefore be sold off more quickly. The prices of the Belgian goods mostly trended downward, those of the domestic ones went up. In Frankfurt, Dutch batches supplemented the range. There were also domestic red products, which could be sold without problems at €6.50 per 9-pack.

Looking at iceberg lettuces, there, it was almost exclusively Spanish products. Only in Cologne, there were Dutch products as well. Domestic products had disappeared from the scene. Due to the lack of competition, prices often went up, but this noticeably slowed down the subsequent sales in Hamburg. In the Hanseatic city, traders then lowered their prices again.

In the colored salad sector, large calibers were popular. In general, the range consisted of domestic and Belgian items. In Frankfurt, the first French goods appeared, costing €9.00 per 9. Italian deliveries rounded off the markets in isolated cases. In the case of endives, the presence of Italian arrivals increased noticeably: At the same time, German supplies became scarcer. The demand was generally satisfied without any problems. Prices remained stable here and there, but mostly showed a downward trend. 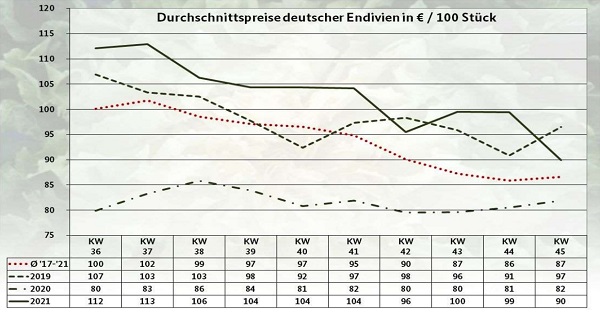 Pears
The markets were sufficiently supplied. Sales were very slow. The traders rarely had cause to change their previous prices.

Bananas
The supply of the ripening plants sufficiently harmonized with customer demand. Price changes were rare.

Cauliflower
The German season was entering the home stretch: Deliveries tapered off. However, as a result of increased shipments from Italy, demand could generally be met.

Cucumbers
Spanish cucumbers clearly dominated the market: their presence increased. The season for Central European products was already well advanced, and the relevance of Belgian, Dutch and domestic lots was massively limited.

Tomatoes
It was possible to access a wide-ranging and quite extensive offer. Demand could generally be met. Prices developed unevenly.