Spanish Primofiori predominated, when looking at the lemon market. In terms of importance, Turkish and South African fruits followed in almost equal proportions. Imports from Uruguay only arrived in Frankfurt and were therefore only of a supplementary nature: their quality was not up tp par either, which is why they attracted little attention.

The last Argentine batches still to be found in Hamburg also had these problems. In most cases, supply and demand balanced each other out. As a result, traders rarely had to adjust their prices. In Frankfurt and Cologne, however, there were slight price reductions. Munich and Berlin, on the other hand, saw rising prices as sales improved and availability had narrowed somewhat. 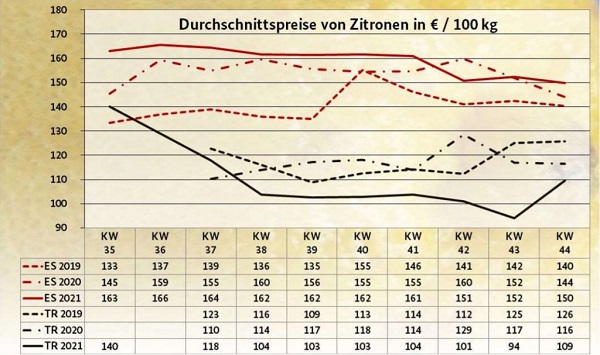 Pears
There was a wide range of supply: Italian batches predominated, with Turkish, Dutch and domestic goods following. The organoleptic characteristics of the products were generally good.

Table grapes
Italian shipments, mainly Italia, Crimson Seedless and Michele Palieri, formed the basis of the range. From Turkey, meanwhile, came in Red Globe, in addition to the long-established Sultana and Crimson Seedless.

Small citrus fruits
The availability of Spanish clementines expanded immensely. Demand could not always keep pace, so traders had to lower their prices on several occasions if they wanted to avoid surpluses.

Tomatoes
A wide assortment continued to be available. Availability often turned out to be too extensive. Traders often reduced their prices to avoid overhangs.