Naturkost Schramm Import-Export Ltd has been importing fresh organic fruit and vegetables from Spain, France, Morocco and southern Germany for over 30 years. Managing Director Christian Kaufmann told us that he sells his goods exclusively to specialist retailers and organic supermarkets. We spoke to him about specific varieties and the trends he is currently observing.

Smooth citrus imports from Spain
"We source our oranges,

clementines, grapefruits and lemons from the Spanish regions of Valencia and Andalusia. A few years ago, we had Moroccan goods on offer as well, which we however have discontinued completely. So far, we have had no problems whatsoever with Spanish products in terms of caliber, quantity and packaging," says Kaufmann.

The managing director also praises the shipping from southern Spain: "So far, we have always been guaranteed that the goods will reach Germany on time. Of course, there were difficulties here and there last year due to the lack of personnel in some plants. However, the situation has returned to normal to some extent."

The first clementines were harvested and marketed as early as the end of September. "However, that is actually too early. You can also tell that the season has only really started in the last two weeks, because so far the fruit was either still too sour, had hardly any sweetness or not enough juice. But since the end of October, the produce has been in pristine condition." 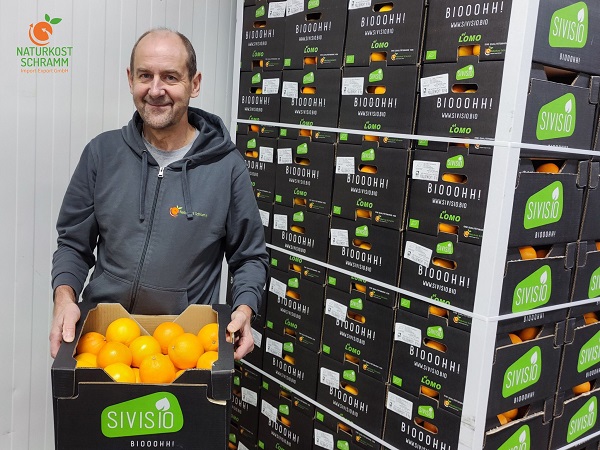 Marketing from September to July
The season starts with the Navelina variety, followed by Navel Lane Late then Valenicalate. "While there is no particular demand for specific varieties, there is demand for specific growers. Oranges in Seville, for example, don't carry the same flavor as those from Valencia or Murcia."

"We can market oranges almost throughout the year. Last season, we were able to offer oranges until the beginning of July and start the new season as early as September. But the main volumes are sold from November to April. As soon as the first stone fruits from Spain come onto the market from May, citrus sales also go down significantly."

Trends: larger sizes and cartons
For Kaufmann, it is clear that there is now more demand for larger sized oranges. However, one thing makes Kaufmann wonder: "While most in the fruit and vegetable sector want to deliver their goods via reusable crates from IFCO or EPS, the orange trade continues to rely on cartons. I can imagine that this also has to do with the fact that appropriate logos and other details can be attached to the crates, which makes selling them in this form more attractive. Especially since there is also no adequate crate form in which the oranges fit as well as in cartons."