"We experienced a decrease in sales of about 30%"

In week 43, the grapefruit season began for Sapros Handels- und Vertriebs Ltd with the first goods from Turkey. The season will continue until about January/February 2022, Carlo Salerno from the Karlsruhe wholesale market told us. We spoke with Salerno about the start of the season as well as the current mood at the wholesale market.

"The quality of grapefruits is very good. Our customers include various gastronomy and catering companies from the Karlsruhe area, in a radius of about 80 to 100 km. We also supply smaller amounts to food retailers," Salerno says. 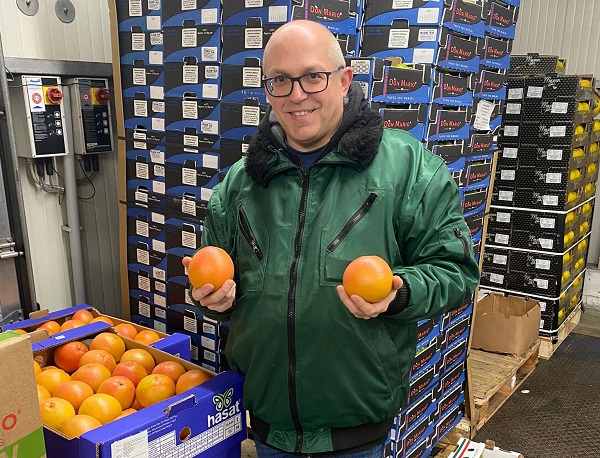 Start of the Spanish season in December
Although Sapros already offers smaller volumes of grapefruits from Spain, he says the quality is not particularly good yet. "We don't really start the season for Spanish produce until December, when the fruits are significantly more red-fleshed on the inside," says Salerno. Of the grapefruits, Sapros offers only the Star Ruby variety, which continues to be very popular.

Demand has remained relatively the same compared to last year, he says. "We also cater to market traders, who, unlike gastronomers, are more interested in large unit products because these are also more in demand at weekly markets. Gastronomers can't do as much with the big grapefruits as grocers can." In terms of logistics, there have not been any significant problems recently per se, but there have been individual delivery problems, due to a lack of shipping space.

Sales volume down
"The sales level cannot be compared with those of recent years. I guess we had a decline of about 30-40%. We also clearly felt the closures of various catering establishments and thus of former customers," Salerno said. However, Sapros did not feel compelled to lay off employees. "We simply had to adjust our working hours."

Mood at the wholesale market
"We now live off the customers who buy directly from us. But if the weather doesn't cooperate, or if customers stay away due to various other factors, both we and the market traders will naturally suffer. Of course, the low supermarket prices don't exactly entice customers to shop at the weekly markets either."