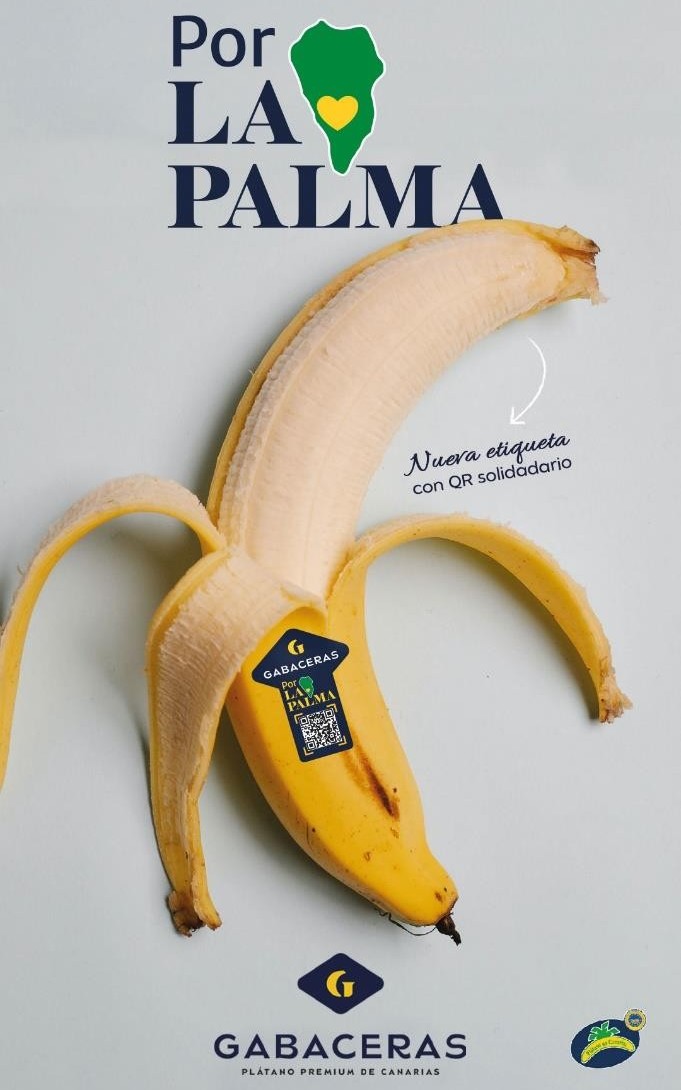 The Gabaceras bananas have a new sticker. The brand of the Europlatano company, which is located in La Palma, has launched a special sticker and tape in support of the farmers of this island who are being affected by volcanic eruptions.

The new elements include the slogan 'For La Palma' and a solidarity QR code linked to the Gabaceras website with all the information about the current situation on the island, the various damages caused by the volcanic eruption, and information on how to help the people affected by the eruption through the Cabildo de La Palma and the Red Cross.

Gabaceras was born in the Aridane Valley, one of the largest banana production areas in the Canary Islands, that is now affected by the eruption of the Cumbre Vieja volcano. The eruption began on September 19 in the municipality of El Paso. Since then, the Europlátano team and all the producers on the island are living through the most difficult moments in their history.

The lava has advanced, affecting many homes, but also the cultivation and way of life of many families, especially of the banana sector. The volcanic eruption damages the plantations in several ways. The lava can directly impact the crops (several farms have been buried by it), it can cut off the roads (which prevents producers from accessing the farms to take care of the crops), destroying the irrigation networks, and the volcanic ash can affect the plantations.

"This is one of the worst moments that the banana sector in the Canary Islands has faced and we stand in solidarity with the people affected by La Palma volcano and reiterate our commitment to bananas and our people after almost three decades of history," Europlatano stated.

The bananas from La Palma maintain their quality
"Gabaceras has established itself as a benchmark for Canarian bananas and it continues to be so. It stands out thanks to its quality, flavor, and artisanal cultivation," they stated. "The volcanic ash in the plantations scratches the outside of the bananas and makes it harder to collect, transport, and package it. However, it does not affect the fruit's taste or properties. The bananas are perfectly suitable for consumption."

A new image with the same values as always
In October, Gabaceras presented its new image with the aim of modernizing itself to continue advancing. "We have managed to create a logo that portraits our traditional origin and brand philosophy, our commitment to quality and flavor as a way of differentiation, and the certifications that guarantee this," they said.

The new image will be accompanied by a communication campaign under the 'The taste of those who know' slogan seeking complicity and a real connection with consumers, so they partake of the taste of the Canary Islands.