Electricity has been restored at the Johannesburg fresh produce market

News of the electricity woes at the Johannesburg municipal market last week has made headlines in South Africa; the fresh produce market in City Deep, Johannesburg has long been a target of copper cable thieves. 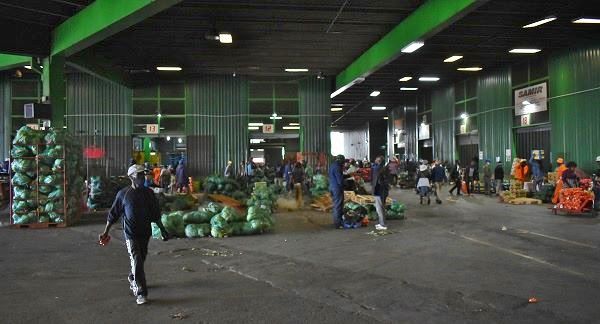 "How many millions haven't we lost because of the power cut!" sighs a banana trader. He explains that bananas can take one night uncooled but after two nights they are compromised - even 'cooked' as heat builds up.

No bananas were dumped, he says, but the break in the cold chain has resulted in prices for these bananas dragged down to as low as R150 (8.3 euros), even R100 (5.6 euros) for an 18kg carton of extra large bananas (a size which is scarce at the moment).

"The power cut here at the market has been costing banana producers a lot of money and I think producers are going to start sending more volumes to privately-run markets and ripening facilities to avoid the municipal markets."

"We have avos that we usually put in the cold store but because demand was good, we were selling them out," remarks an avocado trader at the market.

The Johannesburg market is run by Johannesburg city authorities which derive an income from trade on the market, but those on the floor note that maintenance has been on the decline since the turn of the century.

"The big power outage last week had a big impact on our strawberries but fortunately we didn't lose any strawberries as the volumes from our Limpopo producer decrease this time of the year," says Michael van der Walt, apple and strawberry specialist at Citifresh market agency at the Johannesburg market.

Apples are more resistant, but the current South African apple crop were harvested many months ago and when they leave the CA rooms, they can quickly age.

"The market ran generators during the day which cooled the fridges, where we kept it at night. The apples are kept at 2°C and temperatures in the fridges would go up to during the night before the generators come on again in the morning."