The preliminary estimate of arable crops in the Netherlands has been completed. It shows that 2021's seed onions' gross yields should be 19,6% higher than in 2020. Ware potatoes' gross yield is expected to drop by almost five percent. And that of sugar beets' is expected to be 2.3% lower. That is according to Statistics Netherlands' (CBS) latest figures. 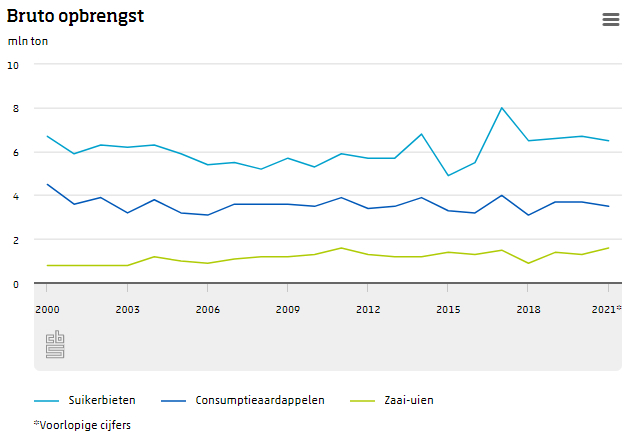 In June, the CBS published figures about the cultivated acreage of these products. These crops'  expected hectare yields have now been added. Experts use the latest available information to estimate these figures. The CBS estimates the gross yields using the cultivated area and the expected hectare yields. The final forecast's gross yield may be lower. That could be because, say, growers harvest less acreage than they planted. The final 2021 harvest figures will be released at the end of January 2022.

More seed onions harvested
According to the preliminary crop destinations, seed onions' gross yields for 2021 will amount to about 1.6 million tons. So, almost 20% more should come off the land than the previous year. This year, 350,000 tons of second-year onion sets are expected to be harvested from 62,000 hectares. That is around 22% of the yield of seed onions.

Fewer ware potatoes
In 2021, the gross yield of ware potatoes could fall by 3.5 million tons. That is nearly five percent less than in 2020. 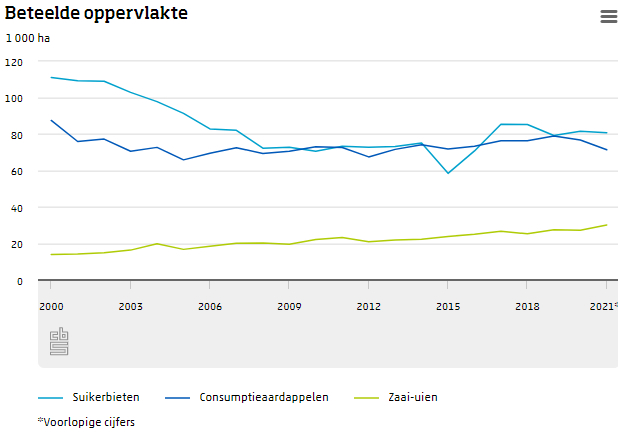 Higher yield/hectare for seed onions, ware potatoes
At 52.2 tons, seed onions' yield per hectare is estimated to be higher in 2021. That is 6.5% higher than last year's final figures. Along with the acreage increase, this leads to an increased expected gross yield of seed onions. There is a vast difference in hectare yields per farm this year.

That is partly because of downy mildew infestation due to the humid weather. In 2020, the yield per hectare for seed onions was still 3.2 tons below the level expected now. The CBS estimates hectare yields second-year onion sets at 56.2 tons per hectare.

For ware potatoes, the estimated yield per hectare is much the same as last year - 49 tons. 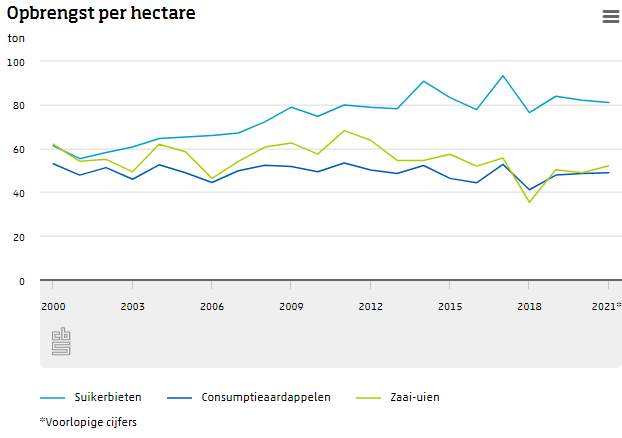 Preliminary and final harvest estimates
The projected hectare yields could vary considerably throughout the Netherlands. And even between plots within regions. Total gross crop yields may end up being higher or lower. Due to factors like the weather, it could be that some of the cultivated areas cannot be harvested.

The final 2021 harvest estimate (the gross yield and yield/hectare) will be published in January 2022. It is based on a survey of almost 5,000 growers. That survey will help determine what the final yield per hectare is and how much of the cultivated land the growers actually harvested.