"We see the two biggest problems of the 21st and 22nd century being excess seawater, carbon dioxide, and labor,” says Sam Norton Founder of Heron Farms. The best and least-cost solution, according to Sam, is creating photosynthesis with these three resources. The only way - for now - to do photosynthesis with seawater is growing halophytes.

Similar to the Netherlands, Charleston (South Carolina), where the company is headquartered, is at a high risk of rising seawater. The city has been facing several floods, and subsequently, many see seawater as an issue. At Heron Farms, however, they see it as a resource, the fuel of their farms.

A replacement product
There are some uncertainties about using sea beans in certain cuisines. However, Sam explains that Heron Farms is bringing out tips and tricks on how to replace salt. “We want to show that table salt can be replaced with plant-based sea salts,” he says.

As sea beans are an amaranth family plant, they are a healthier replacement for salt and spinach, especially given the sodium content. "It’s produce, but very saline produce. This makes it easier to explain to customers why they should use it as a replacement."

Currently, the company is supplying one species of sea beans. Next to that, Heron Farms is growing several plants for R&D purposes. Sam gave away that a new product can be expected on the shelves in the spring of 2022. The company is rolling out another farm during the same period as well. 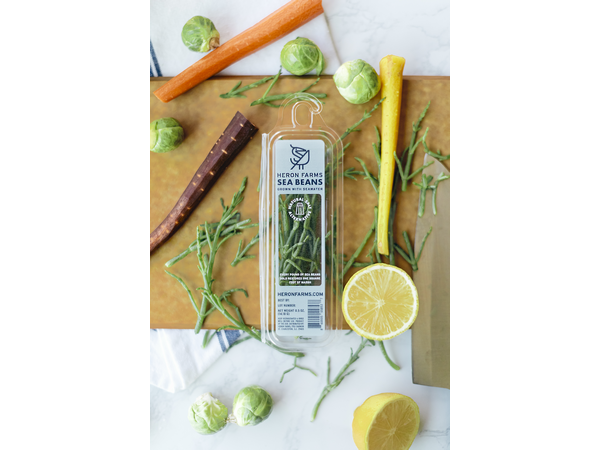 Manipulating salinity
Sam explains that monitoring and manipulation are the hardest part of cultivating salty crops, but these issues are tackled with software: the company has teamed up with Amplified Ag, where their software helps monitor and manipulate the salinity of the crops. “In comparison to other freshwater farms, you would need a separate system in terms of irrigation, software, and reservoirs. It’s not really a plug-and-play system like freshwater systems. We’re learning every step of the way,” Sam states.