The 2021 growing season was characterized by a dry spring, a cold, wet May and cool summer months with much precipitation: "Overall, Tyrolean farmers were able to harvest a good crop, although the weather conditions were mixed. Depending on the individual crops, the weather has of course had different effects," LK President Josef Hechenberger draws a positive balance, according to the Tyrolean Chamber of Agriculture (Landwirtschaftskammer Tirol). 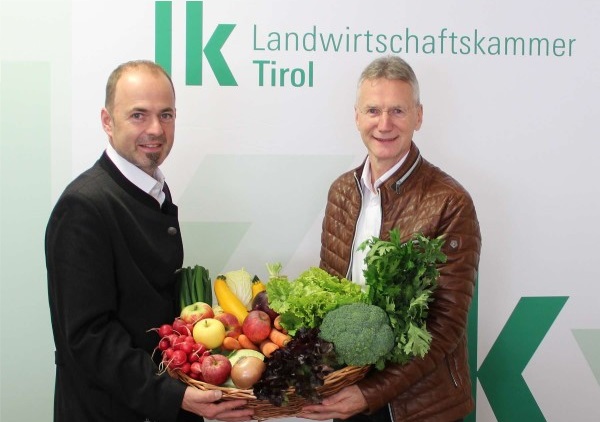 Vegetables
The LK department "Special Crops and Market" is home to fruit and vegetable production and arable farming, among others. Wendelin Juen, head of the department, summarizes this year's harvest in these areas as follows: "Regarding potatoes, here the weather has led to isolated failures due to fungi, but in terms of quantity this has been less of an issue, which is why the quality of the yield is pleasingly high."

Vegetables are grown on an area of 1,500 hectares in Tyrol, of which some 150 hectares are cultivated organically. The quantity harvested amounts to about 40,000 tons. A main crop in Tyrolean vegetable cultivation is radishes. From 200 hectares, 20 million bunches of radishes will be harvested: "The summer was characterized by above-average rainfall. The wet fields resulted in increased infestation with fungal and bacterial diseases, but there were fewer insect pests and mites. This resulted in poor harvests of lettuces and radishes and led to shortages of lettuces throughout Europe and generally poor availability of produce for the trade. However, this year radishes were still sown until the last week of September, which is about two weeks later than usual."

Fruit
Frosty nights that occurred during fruit bloom caused major damage, especially to stone fruit. At the same time, there were hardly any apricots. In contrast, apples and pears were mostly spared due to protective measures and a good advance warning system. Even during the two hail events in the Innsbruck-Mittelgebirge area and in the Telfs-Haiming area, not much fruit was damaged due to the use of hail nets. The apples are smaller this year, but fruit quality and firmness is good. "The quality of the harvest can be seen just as much in other products, such as strawberries, cherries and plums. The soft fruit season was delayed as well, but there was hardly any frost damage. Problems triggered by hot spells, such as drought, heat damage and sunburn were not relevant in 2021," Juen says with satisfaction. The large amounts of East Tyrol snow in winter led to damage caused by snow pressure.

Market
Food produced in Tyrol is mainly sold through grocery stores, which also focus on regionality. While there was a sharp drop in sales via the catering trade due to corona, sales via direct marketing increased significantly. The effects of climate change, such as above-average precipitation, the absence of stable periods of heat, repeated heavy rain and hailstorms, are having a direct impact on agriculture: "We will have to adapt to this even more in the coming years. That's why we're also on hand to help farms with our advisors."