The 13th edition of Fruit Attraction saw the participation of 65,000 professionals from 110 countries. Although almost 90,000 people had attended the latest on-site edition, the expectations of Ifema Madrid have been exceeded: "This event is very important for the industry as a whole, as it brings together professionals with maximum decision-making capacity. It offers the right place and the right time for campaign planning. 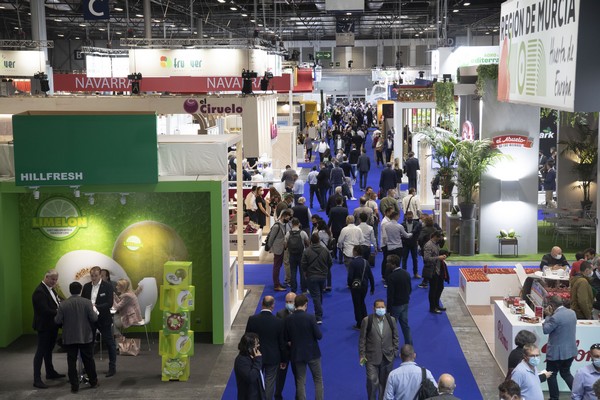 An international gathering
Industry professionals' trust in the fair was also reflected in the number of international visitors, which accounted for 37% of the total. Once again, those from Europe were the most numerous in the international segment, with visitors from France, Italy, Portugal, the Netherlands, the United Kingdom, Poland, and Germany standing out. The number of Latin American professionals was also significant, especially those from Peru, Chile, Mexico, Colombia, and Ecuador, in addition to those from North America. Also noteworthy was the influx of professionals from the MENA region. The influx of visitors from the Guest Importer Markets (a program co-organized with ICEX), Brazil, Ukraine, South Korea, and Belarus, was also significant.

As to exhibitors, there were a total of 1,303 companies, which was around 500 fewer than in the 2019 edition. International participation accounted for 46% of the total, with 600 foreign companies from 43 countries, with a noteworthy presence of European firms, especially from Italy and France. Also noteworthy was the Latin American presence, mainly from Colombia, Peru, Costa Rica, Ecuador, and Mexico.

When it comes to domestic visitors, Fruit Attraction 2021 was attended by a total of 703 companies from all Spanish production areas. The success lies mainly in the great interest of Spanish fruit and vegetable producers in international marketing, precisely in a key month for campaign planning.

Awards
The Innovation Hub Awards were presented at the Fruit Attraction. On this occasion, they were awarded to the company VallOndo, which won with its mushroom self-cultivation kit in the Fresh Produce category, to ClassPack and its Bio Salad Rol in Auxiliary Industry and, finally, in the Sustainability and Commitment Actions category, Manter Ibérica for its Leaf machine.

The fair was also the stage of the award ceremony for the winner of the first Fruit Attraction Podcast Contest: #agroinspiration stories. The winner was the podcast "De vacaciones y salvavidas" ("On vacations and lifeguards"), by Looije.

The highlights of this edition will remain accessible on the Fruit Attraction LIVEConnect platform, which remains active and will allow professionals to continue contacting other industry players.

The next edition of the fair will be held in Madrid from 4 to 6 October 2022, under the direction of María José Sánchez, new head of the agri-food area of IFEMA Madrid.