‘Peruvian blueberry imports via Philadelphia and NYC expected to decrease’

Despite setting a new record of over 100 ships anchored offshore waiting for unloading berths at the Ports of Los Angeles and Long Beach this week, shippers report that offshore produce is making its way to markets in greater volumes. The ports are among the busiest in the world and the delays caused by the backups have a ripple effect throughout the world. It is important to note that September 2021 was a record-breaking month for west coast ports in many aspects, as the month was the busiest and highest volume ever recorded for imports.

Import volumes through Los Angeles were up 26% compared to 2020. Conversely, export volumes dropped 42%, to the lowest levels seen since 2002, exacerbating the ongoing problem of empty containers causing congestion around ports.

Mexican avocado crossings through Texas expected to remain about the same. Trading was fairly active with a wide range in prices tightening up later in the week. Prices generally trending higher on larger sizes as heavy volumes continue. Demand moderate as more fruit than expected was harvested. 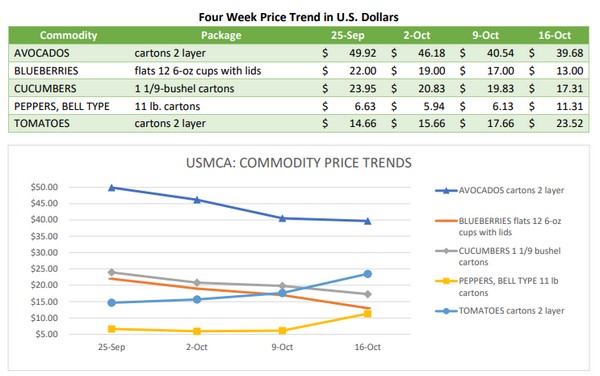 Peruvian imports of blueberries arriving through the Philadelphia and New York City areas movement via boat is expected to decrease as the season is past peak. Trading was active with prices generally unchanged. Peruvian imports arriving through Southern California movement via boat is expected to decrease seasonally. Trading was active with prices firm. Shippers report that new regulations making every container subject to phytosanitary inspections upon arrival have added to the unloading and delivery delays, along with the lack of automation at the Los Angeles area ports.

Mexican blueberry crossings through Arizona, California, and Texas movement expected about the same. Trading was slow early and very slow later at lower prices. Demand continues trending lower as more competing product from Peru becomes available on the market and as Mexican berry quality is reported as variable.